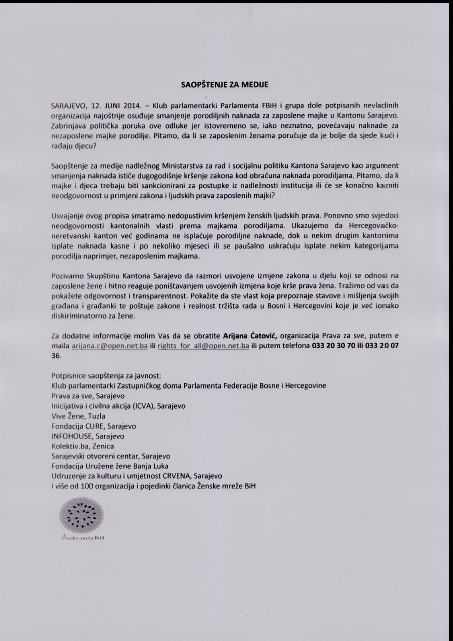 Sarajevo, 12th June 2014 – The Women‘s Club in the FBiH Parliament and a group of NGOs that have signed the attached statement strongly judge the lowering of maternity leave compensation for working mothers in Sarajevo Canton. The political message of this decision is cause for concern, because the compensation amount is simultaneously being increased for unemployed mothers. One must wonder whether working women are being told they should stay at home and have children?

In a press release they issued to justify the action The Ministry for Employment and Social Policy of Sarajevo Canton which is in charge of the decision, stated that the old practice of calculating the compensation was in breach of the law. Is sanctioning mothers and children really the best way to rectify that, or should more effort be put in to establish with whom lies the responsibility for breaching the law and the human rights of working mothers?

We consider the adoption of this decree to be an unacceptable breach of women’s human rights. We, once again, bear witness to the Cantonal government’s disregard for mothers. We want to point out that Hercegovačko-neretvanski Canton hasn’t been paying the compensation out for years, while several other Cantons are even a few months late in their payments, or are discriminating against certain categories of mothers, for an example: unemployed mothers.

We implore the Sarajevo Cantonal Assembly to reconsider the adopted amendments in the part of the law that addresses working women and react swiftly by annulling the changes which are in breach of women’s rights. We impel you to show responsibility and transparency. Show us that you are a government that values the attitudes and opinions of its citizens, upholds the law and understands the reality of the job market in Bosnia and Herzegovina which is already discriminatory against women.