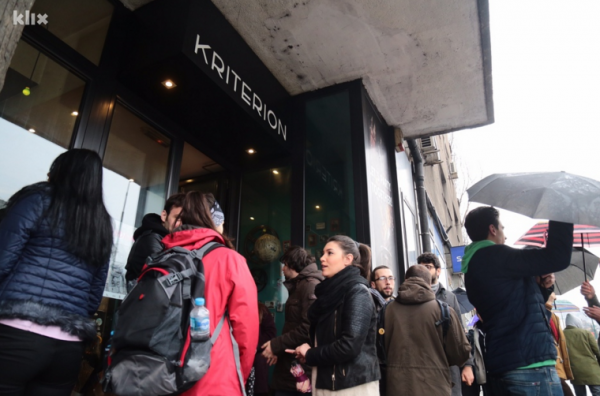 Art Kriterion Cinema in Sarajevo is a place that promotes independent art, but also a space where many LGBT art events take place. It has been a target of another attack spurred by homophobia, following the attack on the participants in the Merlinka Festival in February 2014.

The staff managed to call the police who arrived while the attackers were still inside, but they were not kept in custody.

Wanting, to say no to homophobia once again, a gathering was organized at the Cinema on Sunday, 6 March 2016. Attendance at the event was great and the visitors included prominent figures from public and political life. The number and the profile of those in attendance served to send a clear message that violence spurred by homophobia will no longer be tolerated, nor will fear from violence limit the future activities aimed at promoting the LGBT rights as universal human rights.

“Kriterion has been open for five years and we are a foundation for promotion of culture and of the civil society. I think we have achieved a lot over the last five years and that you have witnessed some great screenings, plays and conferences. Unfortunately we have also encountered things like this. This is the second time that Kriterion has been a target of an attack and because of that we decided to react very loudly and we have asked all of you to come, so that we can, together, send a message that violence will not be tolerated in any form and that it should be judged harshly. Kriterion will keep its doors open and we will persevere in our fight. We ask the institutions in this town and state to join us in this struggle and show that things like this cannot keep happening,” Vanja Lazić, the directress of Kriterion said to those present. She added that there are many events ahead and that Kriterion belongs to us all and not only to those employed there.

Unlike the attack that happened in February of 2014 in Kriterion, or the attack on the participants in the first Sarajevo Queer Festival in 2008, the latest attack and the subsequent gathering have attracted the attention of numerous politicians, which, at least partially, increases our trust in state institutions.

Attendance of the Minister of Justice of Canton Sarajevo, Mario Nenadić has been particularly important. He addressed those gathered, firstly as their fellow citizen, but also as a representative of government institutions and a representative of those in charge.

“This is not an incident, or violent behavior. I am confused by the release of the perpetrators, because this is so much more than violent behavior and this needs to end,” the Minister stated. “This is a hate crime. We need to call things what they are in order to be able to respond to them accordingly. This keeps happening and I hope that this is the last time we will meet on this place for these reasons.”

“I don’t want to ask for love, but for intolerance of this act and similar acts here, and in all other places in Bosnia and Herzegovina. I think that we need to draw a line here together,” stated Sabina Ćudić, the Vice President of Naša Stranka.

An attack on the citizens’ Bosnia and Herzegovina

Members of the country’s cultural strata have also given significant support to the gathering. Among them was Jasmila Žbanić, who stated, “I am here as a mother of a daughter who visits Kriterion, as a person who is fighting for freedom and love in all its forms. I am shocked and appalled, because I think that this is an attack on the citizens’ Bosnia and Herzegovina, an attack on all those who think differently and who are different, and that is why it is of prime importance that the perpetrators be punished harshly – something like this cannot happen again. I think we need to work together on unpacking the causes of this, because the causes can be found in a macho-clerical and patriarchal society in which we live.” Jasmila Žbanić also invited the media and the society to fight against everything that will regress us to the 19th century.

In the aftermath of the 2008 attack Damir Arnaut was one of the rare politicians who openly supported the LGBT population and the participants in the Sarajevo Queer Festival and who had not tried to justify the violence committed. This time, Mr. Arnaut, an MP in the House of Representatives of the Parliament BiH, also stood with those who are fighting against homophobia and violence. “It is unfortunate that things like this are happening in Bosnia and Herzegovina and, particularly in its capital, especially because the persons who have caused grievous bodily harm have been released. People are not detained for grievous bodily harm in this country, but they are detained for a misstatement made to the media – our values are, it seems, inverted. On the other hand, it is encouraging that a great number of people from public and political life have given their support to this gathering. The minister of Justice of Canton Sarajevo Mario Nenadić from SBB has addressed the audience, and another Cantonal Minister from SBB is also present. This is a clear message, but government institutions also need to improve their engagement with these issues in order to punish the perpetrators. It is one thing to make a statement, and quite another to ensure that something like this does not happen again,” Arnaut stated in his speech.

Predrag Kojović, the Vice-President of Naša Stranka and a victim of the 2008 attack on the participants of QSF has continually supported the LGBT community by his participation in advocacy for changes in the criminal law. He has done the same during the latest attack. “I am glad that some other people from the Cantonal Government have also been here, especially the Minister for Justice. That is significant progress in comparison to reactions to Merlinka attack and the 2008 attack at the first Sarajevo Queer Festival. Last week I voted for the proposal of the Changes and Amendments of the Law on Criminal Procedure which would introduce hate crime for the first time. This is an example of such a crime and I hope that this law will be passed soon. If it had been passed, the perpetrators would now not be walking freely and they would be facing at least the minimum set sentence. I understand that it must seem like surviving two minutes under water for all those affected by this – it may not seem like a lot, but it is. But I do think that important changes are happening, primarily thanks to the work of the Sarajevo Open Centre and their efforts to start a discussion on LGBT rights in the Parliament. I am also pleased that there are so many people gathered here today, despite the weather, and that the LGBT community is not alone, but rather that they have support from us all. I hope that one day, being open about one’s identity will be risk-free,” Kojović stated.

In addition to the representatives of the public and political life a surprising number of media were present in Kriterion. If they were to follow other LGBT events, marking something other than violence, with the same fervor, perhaps then gatherings like this would be less frequent.

“The key issue is that the media is reactive and not proactive. You will rarely see someone from the media acting on their own initiative and going to the Prosecutor to inquire about the case from the 2014 attack, on what’s the hold-up, whether they’ve found the people, if they have why they haven’t been brought to justice… Unfortunately that kind of responsibility is still not present in the majority of the media – of course one shouldn’t generalize, but this is something we should work on. There is a similar approach to other topics as well. The media engages with the news for one day and then the next day their focus shifts. I think that they also lack the support to do their job responsibility and professionally,” Saša Gavrić, the Executive Director of the Sarajevo Open Centre stated. He also stated that although the audience may generally not be as numerous, it is consistently present at festivals such as Merlinka. “As long as the situation is like this I would say that this is normal – we have not become desensitized to human rights violations and violence, we are able to stand up to it and give our support to the minority communities who deserve this support, Gavrić stated.

We are not at the beginning

Although some might think that we go back to square one after every homophobic attack, we need to understand that the time from eight years ago, or the time before that when LGBT topics weren’t even in the public discourse will never come back. A lot has been done, primarily thanks to the civil society, but also thanks to the government representatives who have recognized the importance in fighting for equal rights for all citizens of BiH.

In addition to legislative changes and better advocacy by the government representatives and a more agile work by the media it is important to emphasize the need to attend LGBT events, because that is a form of political activism and an obligation of everyone who wants to live in a non-violent society based on equality and tolerance.