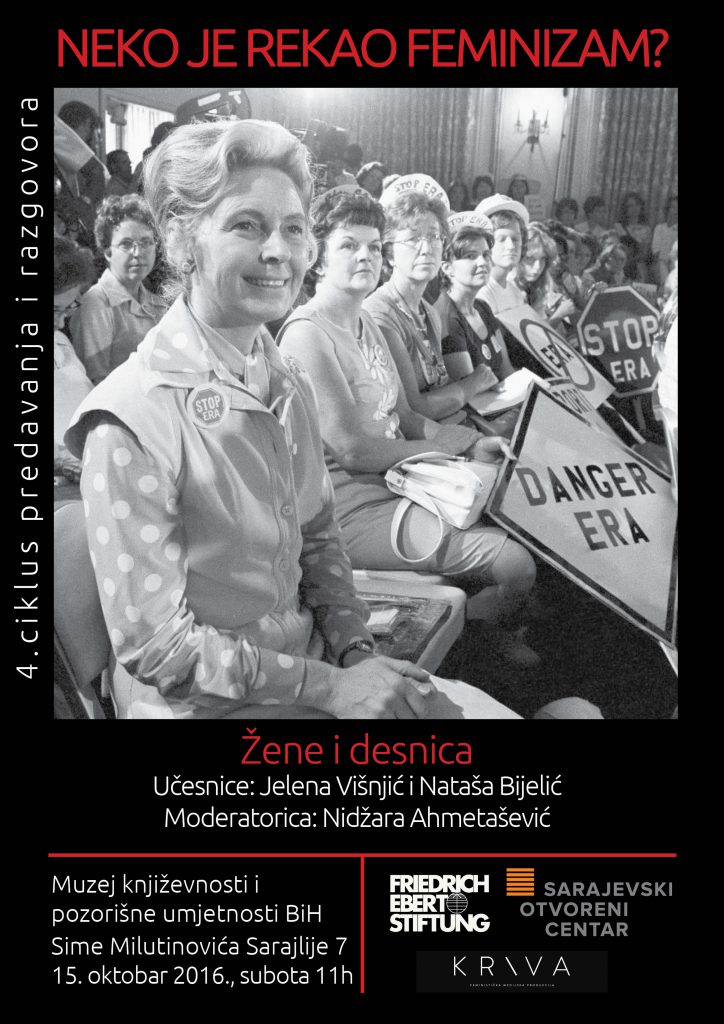 Sarajevo Open Centre and the Friedrich Ebert Foundation in Bosnia and Herzegovina will organize 6 lectures in 2016, which will cover the following topics: Antifascist Women’s Front Archive BiH, ideology and language, challenges facing feminism today, digital feminism, the relationship between right wing, and feminism and reproductive rights.

We are honored to invite you to the lecture in the scope of the 4th series of feminist talks and discussions Somebody said feminism?, the subject being: the relation between right-wing ideologies and women. The lecturers include Jelena Višnjić (BEFEM Feminist Cultural Center) and Nataša Bijelić (CESI – Center for Education, Counseling and Research), and the discussion will be moderated by Kristina Ljevak.

During the discussion, the topics that will be opened include the relation between right-wing ideologies and politics towards women, in the region and in BiH, towards women as political agents, and towards women’s bodies where bio-politics wants to establish control and discipline through legal norms and practices.

Jelena Višnjić, PhD, gender studies (University of Novi Sad). One of the founders and editors of the Festival of feminist culture and action – BeFem. Lecturer and associate in the Centre for women‘s studies in Belgrade and feminist movement activist. She lives and works in Belgrade.

Nataša Bijelić holds BA in Sociology from the Zagreb Faculty of Philosophy and MA in Gender from the London School of Economics and Political Science. She works as a researcher and educator in CESI – Center for Education, Counseling and Research. She deals with the issues of sexual and reproductive rights and health, adolescent sexuality, sexual education, gender equality, gender-based violence and masculinity through education, research and advocacy activities.

Kristina Ljevak, journalist. She lives and works in Sarajevo.