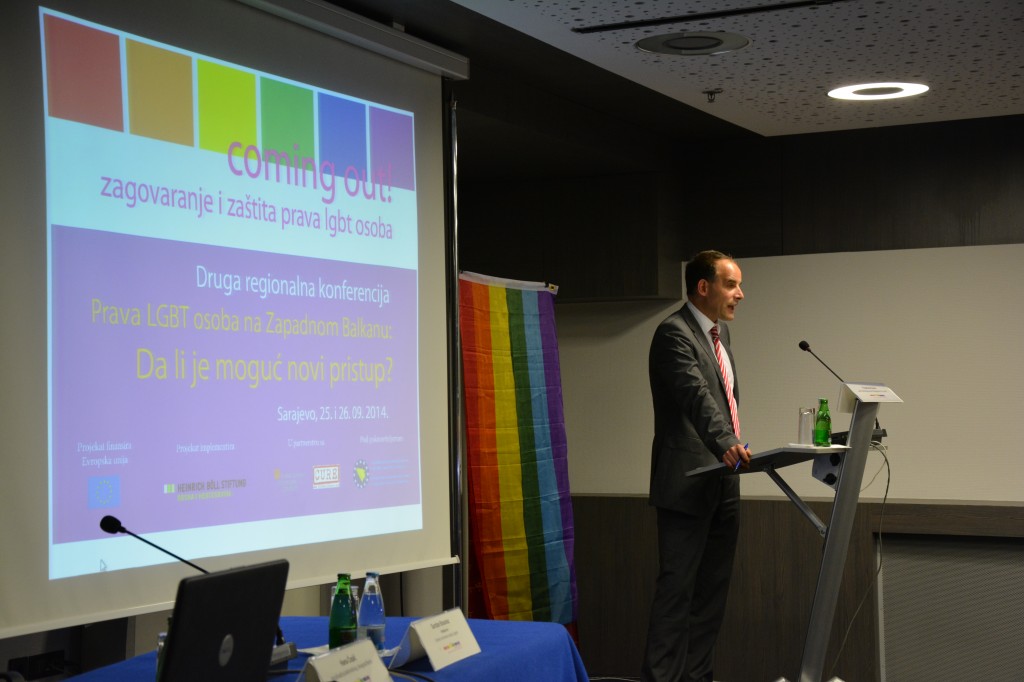 On 24 and 25 September in Sarajevo was held the second regional conference LGBT rights in Western Balkan: Is a new approach possible? that brought together a multitude of activists, but also other participants : journalists, members of different human rights organizations, institution’s representatives, researchers, etc. They have been discussing over two days in several of the panels about the state of human rights of LGBT people, not only in BiH, but also in the countries of the region. The conference was opened by Thomas Busch, Head of the Political Section, EU Delegation to BiH and EU Special Representative. “The European Union considers homophobia and intolerance towards lesbian, gay, bisexual, transgender and intersex (LGBTI) persons incompatible with its standards, and has established rules and actions to prevent and stop this. The EU Delegation to BiH is supporting projects from the European Instrument for Democracy & Human Rights (EIDHR) that aim not just to raise awareness and advocate in BiH society about equality and human rights issues of LGBTI persons, but also to provide legal measures to fight human rights violations against LGBTI persons. This shows that EU is serious about fighting discrimination on grounds of sexual orientation and gender identity and therefore supports all efforts to achieve this goal.”

The conference was organized by the Heinrich Böll Foundation, with partner organizations Sarajevo Open Centre and CURE Foundation within the project Coming out! Advocating promotion and protection of the LGBT rights, financed by the European Union.

On the first day, within the introductory session Two steps forward, one back – the LGBT rights in Europe, in addition to Hana Ćopić, researcher and activist who spoke about the situation in Serbia, Terry Reintke, Member of the European Parliament and member of the Committee on Women’s Rights and gender equality, scored on five fields of action: 1. equal rights in the private and public spheres; 2 fight against everyday homophobia; 3 trans * rights, as all should be able to choose their identity; 4. support of civil society, the creation of public debate, because LGBT issues have to be in the public space; and finally, 5 education, because LGBT issues must become mainstream in schools and universities, for the sake of creating a new approach to education. Reintke thinks that a new approach is possible, but that all must unite in order to be established, and pointed out that within the parliament and other political institutions alliance can exist, but if there are no people from the LGBT community who will stand behind it, if there is no pressure coming from the street and not pressuring, change is difficult. “I can say that I’m going to fight, but it’s different when I say to a right-wing parties that I support LGBT people and in front of building on the street are LGBT people standing.”

Zlatiborka Popov-Momcinovic (The Faculty of Philosophy, University of East Sarajevo) spoke about the sectoral research that was conducted within the project Coming Out !, and specifically referred to the political parties and education. Zlatiborka pointed out that only Naša stranka in its program has included part concerning LGBT population, with the SDP that does not explicitly have a written part on it, but was involved in some activity when it comes to LGBT rights. “Openly homophobic attitudes refered to religious teachings, the ‘natural and unnatural’, the bad economic situation … Often the responsibility is being shifted, even on LGBT people. It is a current phenomenon when it comes to politicians and LGBT people. “Zlatiborka believes that Croatia went three steps forward, although there is a step backwards when it comes to pressure from the church.

The next day there were three panels: The state’s responsibility to protect LGBT people: hate crime / hate speech, Promoting Tolerance: education and Bringing about change: the media. On panel media were speaking about the media reports related to the LGBT population Predrag Azdejković, editor in chief of gay magazine Optimist from Belgrade, Ana Brakus, koodinatorica in association Zagreb Pride and journalist Libela.org and Jasmina Causevic, a researcher at the Sarajevo Open center, with moderation by Kristine Ljevak, journalist from FTV.

Predrag Azdejković says that the media every year, when it comes to Pride parade, follow the same scenario. “The organizers are announcing that there will be a Pride, then Dveri a klerofascist political party which fortunately did not come through the census in elections, say they are against it, then police union come out saying that they do not have no salaries, uniforms and equipment, and that they will have to be struck defenseless with football fans. After that politicians are coming, there is usually Palma, the mayor of Jagodina, which says something homophobic, and it all ends with the head of the Serbian Orthodox Church, who compared us this year too with pedophiles, and who said that homosexuals need to organize the Pride on their own budget and not at the expense of the suffering of Serbia, as he was director of the State Treasury. “However, Predrag pointed out that certain media were critical of the patriarch this year, putting in front of his statements word” hypocritical “. Predrag says, the moment they become part of competition in which one fights for every reader, the media realized that people should give what people love. “And people like homophobia, polling, human rights violations,” said Predrag and highlights the problem of lack of moderation of comments in media, and the lack of programs about LGBT issues in the electronic media.

Ana Brakus said that the referendum in Croatia showed that Croatia is homophobic. “We are homophobic society and our homophobia is inscribed in our Constitution.” She pointed out one bright example of journalism at the time of the referendum, when the cover of the Novi list was completely painted in rainbow colors, plus a thematic issue devoted to a referendum. In her opinion, the dominant media were trying to be objective, while the portals were “classified” by websites. “The day before the referendum on HRTV was scheduled to air emissions Every day a good day where the guest were supposed to be parents of LGBT people. The show was canceled because it would, in case it was released that day, influenced how people will vote. As if the fact that while not having it screening that day would also impact on how people will vote. “Ana pointed out that at this point any reporting on LGBT people in the region represents a particular type of training, since it shows that these people are all around us .

Jasmina Causevic, who moved to Sarajevo from Belgrade in 2006, remembers that in that year she opened the Dani magazine in a bookstore and the first text that she read was an informal wedding of Azra and Vesna, whose author was Belma Becirbasic. “For me it was amazing, and somehow it remained in my memory, as if in Sarajevo, there is some hope and magic. In the region there is a scene and one talks about it, and here it is clearly a twilight zone from which nothing else than national stories again undermining any civil action and anti-capitalism can come. “Jasmina thinks that those media that have serious and argumentative writing about the real problems that LGBT people face have a low profile, citing as an example of the daily Avaz where one can find different titles, even those with affirmative nature, which only indicates that it is a patchy publication, without the system, while, on the other hand, there is an example of magazine Dani that consistently and in a serious way deals with the issues of life of LGBT people.

Panelist on the panel The state’s responsibility to protect LGBT people: hate crime / hate speech were Tanja Vlasic Office for Human Rights and the Rights of National Minorities, Zagreb, Antonio Mihailov from subversive Front Skopje and Mary Ann Hennessey Head of the Council of Europe Office in BiH. The panel was moderated by Emin Bosniak from Sarajevo Open Centre. Tanja Vlasic pointed out that the Institution in Croatia realized the importance of the fight against discrimination and hate crimes against LGBT people through the work as well as what is the current situation. Antonio Mihailov from an activist perspective talked about incidents of violence that took place in Macedonia. It was also shown a video of attacks on the LGBT center in Skopje. Mary Ann Hannessey spoke about the campaign launched by the Council of Europe in Bosnia that was about hate speech.

The panel Promoting Tolerance: education, spoke Amir Hodzic, an independent researcher from Zagreb, Xheni Karaj from Aleanca LGBT Tirana, Mina Damjanovic from the organization for lesbian human rights Labris from Belgrade and Nenad Velickovic from magazines Školegijum from Sarajevo. Moderator of the panel was Sasa Madacki from the Centre for Human Rights, University of Sarajevo. They spoke about discrimination against LGBT people in textbooks, and the general problem of the relevance of the information contained therein. It has been made an overview of the situation in Bosnia and Herzegovina, Serbia, Croatia and Albania when it comes to the sector education.

The concluding words of the conference were given by Sasa Gavric, executive director of the Sarajevo Open Centre. He said that it was time for political parties to recognize and incorporate LGBT rights in their programs, and that both parties, and the non-governmental sector, and civil society must work together to improve the rights of LGBT people. “In Bosnia and Herzegovina we can say that we have laws in which they recognize sexual orientation and gender identity, but inadequately. We need concrete measures for the implementation of these laws, “said Gavric, adding that the major challenge is continuing the empowerment of the LGBT community. When it comes to education, it is clear that this is something that cannot have quick changes, said Gavric. “This conference marked the first joint meeting of representatives from parliament, the government, representatives of political parties, civil society and academic community. The spectrum of participants was very broad and I am grateful to everyone. I hope we can together increase the speed at which we are working to improve the rights of LGBT people and that we will, in accordance with the title of the conference, go three steps forward and one back, “said Gavric in the end.

The conference was held under the sponsorship of the Institution of Ombudsman / Ombudsman for Human Rights in Bosnia and Herzegovina.