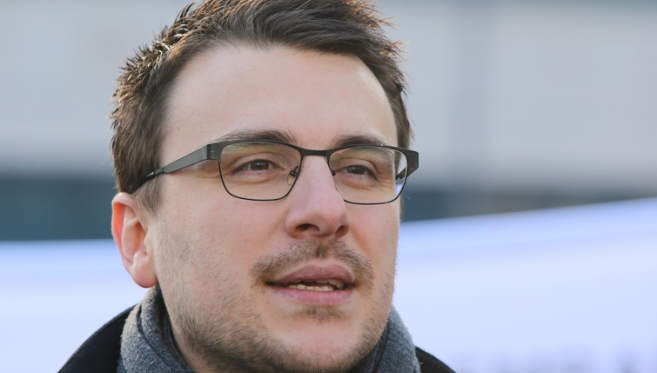 After last year’s elections, Sarajevo Open Centre in cooperation with the Women’s Network of BiH began with advocacy activities towards achieving the target of 40% of women in the executive and legislative branches, according to the Law on Gender Equality. Saša Gavrić, director of the Sarajevo Open Centre, speaks about this initiative, the reactions of the government, future steps of the initiative, as well as the position of the politicians in the fight for gender equality and equal opportunities in politics.

Could you introduce the initiative for 40% of women in the executive branch? How was the initiative launched, who participates in it, and what is its modus operandi?

The initiative is based on ten years of advocacy of civil society organizations, in order to enable equal participation of women in legislative and executive branches. It is the ad-hoc activity of the Sarajevo Open Centre, which we implement in cooperation with the Women’s Network of Bosnia and Herzegovina, and our partner organizations in Zenica and Sarajevo.

Our work began immediately following the elections, when we called on all parliamentary parties in BiH, at all levels, to enable equal participation of women, as well as men, in the executive branch, bearing in mind that this was the initial period of government formation. Through joint actions, from October 2014 until today, we demanded compliance with the legislative provisions and one of the accomplishments of civilization – because gender equality is precisely that – no less than ten times. Our message is clear: governments without equal participation of women are illegitimate and illegal.

You essentially insist on compliance with or enforcement of the law providing women with equal opportunities in politics, as is the case in other countries. Could you shed some light on what law you are referring to and what it encompasses?

After World War II, the majority of European countries had provided women with active and passive voting rights. The question of women’s participation in politics arises around that time. However, the last 60-70 years have shown that women are systematically excluded from the legislature and the executive. In order to eliminate this discrimination, many countries, including BiH, have adopted laws that guarantee equal participation of both sexes in politics. The introduction of affirmative measures for discriminated and/or excluded groups is common practice around the world. In Article 20, the BiH Law on Gender Equality seeks to ensure the participation of women and men in the executive and legislative branches. A government that does not include the minimum 40% representation of both sexes does not have equal representation and is discriminating.

A study titled Political Participation of Women in Bosnia and Herzegovina: Analysis of the Participation of Women on Party Lists and the Final Results of the General Elections 2014, written by our associate Edita Miftari, shows that women manage to get elected to parliaments via the “electoral quota”, but that they are systematically prevented from participating in the executive government. Can anyone recall a single female Prime Minister in the last 20 years, aside from Željka Cvijanović?

It is important to add that this is not just about adhering to the law on gender equality and international standards, but also that it is simply baffling and insane that 50% of the population does not have enough qualified women who can and want to serve as a Minister and/or the Prime Minister. However, such is the message being sent by the politics. We can conclude that this is a systemic discrimination, the eradication of which requires special measures.

You recently sent a letter to the Government of Zenica-Doboj Canton, which has failed to nominate even a single woman for the position of a Minister. After they were reminded that they were supposed to do so, ZDC Government has given some indication that things will change, but ultimately nominated an all-male government. A similar thing happened with the Government of the Sarajevo Canton. You approached them as well, requesting the nomination of women for ministerial positions. The proposed ration was 10 male and 2 female Ministers. This certainly does not comply with the legislative quote. Do such actions demonstrate the attitude of the political structures towards the concept of equality?

The appointment of the Government of Zenica-Doboj Canton, and the nomination of candidates for the Government of the Sarajevo Canton certainly speak volumes about their attitude towards the concept of gender equality. Despite the fact that the Collegium of the Assembly of Zenica-Doboj Canton, based on our initiative, took a clear stand that the government must have equal representation of both women and men, and that the Chairman of the Assembly of Sarajevo Canton called on the parliamentary majority to nominate women for government seats, these initiatives were unsuccessful. Apparently, the law and citizens’ initiatives have no value for them. Therefore, we must work on several fronts in the future. In addition to improving the legislation, measures must be taken to reform the parties. The parties are the alpha and omega of political life. If the parties undergo a reform within themselves, then we may see the day when these two Cantons are headed by a female Prime Minister. Should men continue to make up exclusive or almost exclusive majority in the presidency of the parties and their personnel committees, then there is not much hope.

There are various statistics that indicate the inequality of women in political structures. The figures paint one picture, while the government proposals paint a different one. What is the attitude of women politicians regarding this initiative?

I could answer this question in the manner of our male politicians and say: Well, ask the women in political parties. And leave it at that. But I won’t. For me, there are individual women within the parties who do a fantastic job and who rebel against patriarchal politics, but their involvement is not visible enough. And unfortunately, they remain a minority. Most women are “sentenced” to women’s clubs or forums within the party, within which they are engaged in humanitarian, cultural, and entertainment activities, while the politics comes last. This must change. There are no easy solutions, but if the position of the women’s clubs or forums cannot be saved and improved, then we may need to think of radical solution of eliminating women’s forums or clubs, and demanding the appointment of women in all party bodies. Women should not be isolated, but omnipresent.

What are the next steps of the initiative?

The issue of public and political life of women will remain a priority in the advocacy of the Sarajevo Open Center. We will work on two fronts. One is a modification of intra-party regulations and laws when it comes to women’s participation. The second is direct work with male and female politicians. Within the first package, advocacy activities related to the introduction of the so-called women’s quota of 40% in the political parties will be implemented, and shortly. As I said previously, the parties are the alpha and omega of political life and the changes related to gender equality must start in the parties. In addition, we will advocate for changing the cantonal, entity, and state laws governing the election of the cantonal, entity, and state governments, so that these laws incorporate provisions on mandatory quotas, with accompanying sanctions. It is a mere harmonization of these laws with the Law on Gender Equality. Our request will be simple – we will ask that all governments must have a minimum of 40% of women Ministers. If this provision is not complied with, our suggestion would be that the appointment of the government is considered null and void. Bosnia and Herzegovina will be one of the few countries in the world that have government quotas, but evidently, the alternative is not possible.

In addition to the reform of intra-party regulations and legislation, Sarajevo Open Centre will cooperate with the Friedrich Ebert Foundation in realizing the Equality Academy for the first time this year, a one-year educational program on gender equality and human rights for representatives, ministers, and delegates of cantonal, entity, and state parliaments. The program will begin in April, and we were positively surprised when we were contacted by 30 men and women members of the parliaments, from all major parties, who expressed their desire to participate in this program. We believe that only by working with specific men and women politicians on specific issues, we can expect specific changes.

We have two options: we can criticize and condemn all, and claim that no one is good enough. However, we have chosen an alternative path. We wish to work with those who are in power and to change the little things. There is still a lot of work, but we have no other option but to continue fighting. I hope that the media will continue to support our efforts.