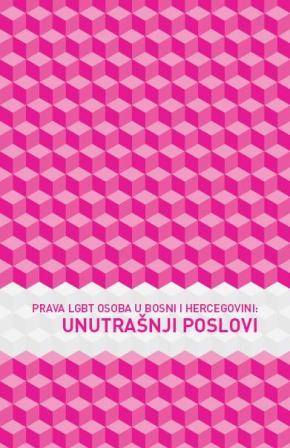 The third report produced as a part of the project Coming out! Advocating promotion and protection of LGBT rights, financed by European Union and implemented by implementira Heinrich Boell Foundation – BH Office, together with parnter organisations Sarajevo Open Centre and CURE Foundation on the rights and freedoms of LGBT persons in the context of interior.

The main results of the research point that LGBT persons are still not a visible category when it comes to modes of police action. Thus, a great number of interviewed employees in the sector of interior states the situation of LGBT persons either equal in the society or as being treated equal. It is a result of insufficient knowledge on the subject, a small number of registered attacks and violence, and the indistinction between the real situation in the society and the perception of that situation. When it comes to public assembly, interviewed persons have often left the discourse of human rights and their professional duty.

Although most of the interviewees said that LGBT persons are citizens like any other, a certain degree of percieving LGBT persons as agressive, which is the result of existing stereotypes that LGBT persons are looking for special rights and tend to impose their opinions to the rest of the normal population, and coming out is not seen as a phenomenon that has social and political implications.

Some of the main recommendations of this report emphasize the importance of education and sensitization of employees in the interior sector, proffesional approach in the work with LGBT persons, building trust between police and LGBT perons, empowerment of LGBT persons to report the hate crimes, relevant data gathering on the number of attacks on LGBT persons, and harmonization of the legislation on the territory of BiH.

This publication (in Bosnian/Croation/Serbian) can be downloaded here.