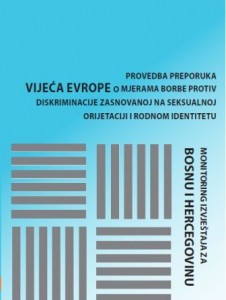 A report titled „Monitoring the Implementation of the Council of Europe Committee of Ministers Recommendation on Combating Sexual Orientation or Gender Identity Discrimination“ was produced and published as a part of Sarajevo Open Centre’s Human Rights edition, and as a part of the project „Monitoring implementation of the Council of Europe Recommendation to member states on measures to combat discrimination on grounds of sexual orientation on gender identity by Bosnia-Herzegovina“conducted by ILGA-Europe. It was also suported by ILGA-Europe’s Human Rights Violations Documentation Fund in the framework of the project „Implementing the Council of Europe’s Recommendation on LGBT rights“. This project is financially supported by the Dutch Government Department for Gender & LGBT Emancipation of the Ministry of Education, Culture and Science of the Dutch Government.

This report is the result of a research project in collaboration with ILGA-Europe, during which Sarajevo Open Centre has contacted 72 Ministries and public agencies on all administration levels involved in different areas such as education, internal affairs, health care, labour, housing and human rights among others. This report is based on the information provided by the contacted Ministries and institutions, and its content analyses the progress B&H public authorities made on the implementation of the Recommendation. The authors of this report are Marinha Barriero and Vladana Vasić, and the report is available in both B/C/S and English language.

The report shows that the only measure taken by Bosnian-Herzegovinian authorities in compliance with the Recommendation is the inclusion of sexual orientation and sexual expression in anti-discrimination legislation. However, in the absence of the other measures, and in the face of severe social hostility, it offers little protection to lesbian, gay and bisexual persons. So far as the Sarajevo Open Centre has been able to ascertain, the authorities have adopted no other measures to implement the requirements of the aforementioned Recommendation. In particular, there has been no review of existing legislation and other measures that could result directly or indirectly in discrimination, no provision for protection from discrimination on grounds of gender identity exists, and no comprehensive strategy aimed at tackling discriminatory attitudes within general public and correcting prejudices and stereotypes has been introduced. The Recommendation and its Appendix have not been translated, and have not been disseminated neither within government nor civil society.

This report is a fundamental tool for advocacy and monitoring the implementation of obligations of B&H authorities and an instrument to influence their work on the required policies and legislative changes in order to improve social and legal status of LGBT presons in our country.

The presentation of the report will be held on the 28th of March at 10 a.m. in Mediacentar, Sarajevo. Participiants of the panel will be authors: Marinha Barriero and Vladana Vasić, and Mary-Ann Hennessy, Head of the Council of Europe Office in Sarajevo, and it will be moderated by Saša Gavrić, Executive Director of Sarajevo Open Centre. We would like to invite you to the presentation of the report and encourage your active participation in the debate that will follow.