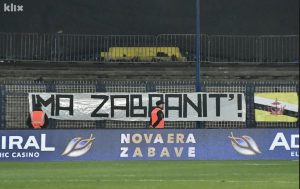 On Saturday, April 6, 2019, a derby between FC Željezničar and FC Sarajevo was played at the Grbavica Stadium in Sarajevo. During the match, in front of the court, the banner “Forbid it, please!” has been hung up, and the flag of the Kingdom of Brunei is also placed alongside the banner. Namely, on April 3, 2019, the Kingdom of Brunei introduced a law that, among other things, made homosexuality a criminal offense punishable by death.

The banner “Forbid it please!” and the flag of Kingdom of Brunei, at the Grbavica Stadium, were placed in a prominent place on the sports field being visible all the time during the game and its television transmission. It is clear that the banner with the flag of Kingdom of Brunei has a very clear message against the announced BH. Pride March and all LGBTI people in Bosnia and Herzegovina, pervaded by prejudice, intolerance and hatred based on sexual orientation and gender identity.

This act is a violation of Article 4, paragraph 1, item d) of the Law on the Prevention of Violence and Misbehavior at Sports Events of the Sarajevo Canton, where, under violence at sports events of this Law, it is particularly considered, among other things, to emphasize the characteristics, banners and excuse slogans encouraged by racial, religious, national or other intolerance and hatred, or whose content is offensive or impure, which can lead to physical conflicts of fans or other participants and endangers the life or integrity of the person, or damage or destruction of property.

Also violated is Article 6, item e) of the Law on Sports in Bosnia and Herzegovina, according to which the basic principles on which sport is organized in Bosnia and Herzegovina are, inter alia, the prohibition of spreading hatred and intolerance based on ethnic or ethnic affiliation, skin color, religious, political or other beliefs, sex, sexual orientation, disability, gender identity, language or any other personal characteristic.

Sport events in accordance with the national legal framework should not spread and support hatred, intolerance and discrimination against others and different because of their personal characteristics.

For this reason, we consider that the highlighting of insulting banners and features on sports grounds against a group of citizens, in this case LGBTI persons in Bosnia and Herzegovina, due to the use of their guaranteed freedom of assembly, constitutes serious violations of previously mentioned (above) law.