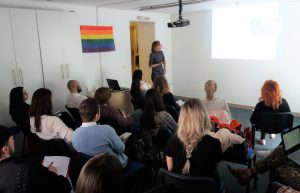 On Saturday, 20 April 2019 this year’s Žarana Papić School of Feminism has started, with the fifth  generation o students. We began the lecture of the Module 1 – Introduction to feminism: History, terms, theory, whose lead, Jasmina Čaušević, MA of social sciences in the field of gender studies, talked briefly about the feminist and women’s studies and their relation to the standardized and academic knowledge. Zlatiborka Popov Momcinovic, professor of political science at the University of East Sarajevo, talked about the history of women’s association and movement in Yugoslav countries, including Bosnia and Herzegovina.