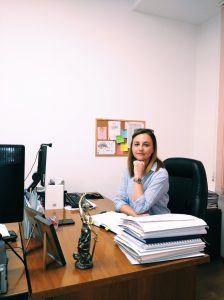 For several years, the Sarajevo Open Centre has focused on sensitizing police officers, prosecutors, judges, and lawyers, as well as increasing LGBTI people’s trust in the police and the judiciary. We have been working on educating representatives of the entire judicial chain through various projects and activities since 2013, because we believe that increasing legal professionals’ knowledge will increase the effectiveness of the existing legal mechanism for protecting the human rights of LGBTI people and other minority groups.

We continued the positive practice in May of this year, and the Prosecutor of the Prosecutor’s Office of the Tuzla Canton was appointed to receive criminal charges filed by LGBTI people. Prosecutor Lejla Gazibegović Begović attended our training for prosecutors of the Cantonal Prosecutor’s Office of the Tuzla Canton on anti-discrimination and criminal law: legal protection of LGBTI people, and experiences in BiH and the region.

We spoke with prosecutor Gazibegović Begović about the significance of this training and her designation as a point of contact for all LGBTI people in the Tuzla Canton in the event of violence and discrimination based on sexual orientation and/or gender identity.

SOC: Do you believe that the training on hate crimes against LGBTI people was useful for you and your colleagues?

Lejla Gazibegović Begović: The training on hate crimes against LGBTIQ people was useful both for me and for my colleagues who participated in the training. Although the legal framework for hate crimes has improved in recent years, any work on education and sensitization leads to the identification, more efficient prosecution, and more adequate sanctioning of perpetrators of such crimes.

SOC: Has the Cantonal Prosecutor’s Office of the Tuzla Canton previously worked on cases of criminal offences committed on the grounds of prejudice based on sexual orientation and/or gender identity?

Since 2015, I have been assigned to the Department of Juvenile Delinquency, which charges cases against juvenile offenders and to the detriment of juveniles, and in which there was no work on cases of criminal offences committed on the grounds of prejudice based on sexual orientation and/or gender identity.

SOC: Why do you think it is important to have a point of contact in front of the Cantonal Prosecutor’s Office of the Tuzla Canton who will be in charge of receiving criminal charges for incidents and hate crimes committed against LGBTI people?

Jozo Blažević, program coordinator at the Sarajevo Open Centre working on the education of legal professionals, complimented the Prosecutor’s Office of the Tuzla Canton for their proactivity.

“The willingness of the Cantonal Prosecutor’s Office of the Tuzla Canton to send its prosecutors to participate in the LGBTI human rights training and sensitize them to work with this marginalized group is an example of proactivity and willingness to constantly improve and professionalize their work that judicial institutions should foster. Such training is a significant step in building trust between the judiciary and LGBTI people. The institutionalization of this cooperation through the appointment of a point of contact, more specifically a contact prosecutor for hate crimes against LGBTI people in this Cantonal Prosecutor’s Office, is a mechanism that will undoubtedly increase the number of reported and processed cases of such criminal offences, as evidenced by the Sarajevo Canton, where it was established in 2018.”

“Appointing a point of contact in charge of receiving criminal charges for incidents and hate crimes against LGBTI people in the most populous canton is a great accomplishment for the Sarajevo Open Centre. I am pleased that our devoted and long-term work, as well as our approach to building institutional understanding and mechanisms for the protection of LGBTI rights, directly responds to the mapped and actual needs of LGBTI people”, said Emina Bošnjak, Executive Director of the Sarajevo Open Centre.