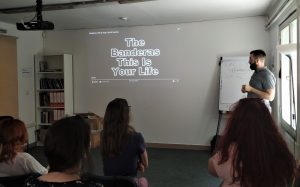 On Saturday, 29 June, the final lectures of the fifth School of Feminism Žarana Papić were held. Alen Kristic, through ethical-theological discourses, talked about abortion, homophobic abuse of the Bible and the Qur’an, gender ideology and blasphemy, while Nebojsa Jovanovic discussed the Yugoslav films through the function of the ideological matrices in them.

The activities of this year’s School of Feminism will continue in the autumn.