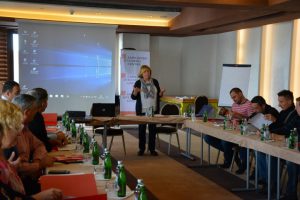 After last year’s successful completion of the Train the Trainer programme for the police officers of the Cantonal Ministries of Interior (MoI) and the representatives of the Police Academy of the Federation of BiH, this year every Cantonal MoI has to implement education programmes on hate crime. The mentioned education programmes should be implemented in the scope of their permanent trainings that are mandatory for each and every police officer of each MoI. Sarajevo Open Centre has advocated with every MoI in particular and made constant pressure directed towards introducing the module on hate crime into the programme of mandatory education, in which we have, to our great pleasure, succeeded.

These days we are in contact with all the Cantonal MoI’s, in order to see how things are progressing. The information we have is that some of the MoI’s have already implemented the education on hate crime, some are in the process of implementation at the moment, and the others will implement them by the end of 2017. So, in the regular and mandatory topics for educating the police officers of FBiH each Cantonal MoI has included the module on hate crime.

During 2016, Train the Trainer programme has been implemented by Sarajevo Open Centre in cooperation with the OSCE Mission to BiH.

The text taken from the portal Oslobođenje.ba, originally published in B/C/S language, on 28 July 2017