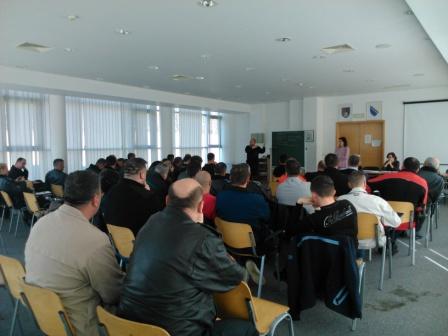 At the premises of the Support Unit of the Ministry for Internal Affairs of Canton Sarajevo, the first two trainings were held on sexual orientation and gender identity as for police officials of Sarajevo Canton as part of the continuous training and field work of the police in the community. Support was provided by the Sarajevo Open Center. During every week for the next year, police officers will learn about recognizing crimes based on prejudice against sexual orientation and gender identity, and the treatment of LGBT people of such crimes. Around 1.500 police officers of Canton Sarajevo will go through this training until March of next year.

On the other hand, LGBT people often suffer violence, verbal, physical or psychological, and because of shame or fear of violence increasing if the crime is reported to the police, and due to lack of trust in the police and state structure in the protection against violence, crimes are not reported. 86 percent of LGBT people who have suffered physical violence did not report the crime. Institutions that protect the safety of persons have to be the pillar of security for all citizens, especially those who are in the most vulnerable position and who belong to marginalized groups in B&H society.

Sarajevo Open Center will continue to cooperation with the Ministry of Interior of Canton Sarajevo at trainings of police officers in dealing with two problems: the increased degree of violations of human rights on LGBT people and building a relationship of trust of LGBT people in police officers.