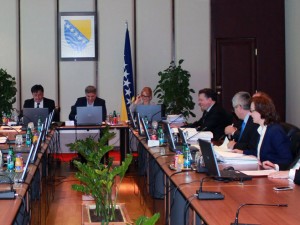 From 135 ministers in the Council of Ministers of Bosnia and Herzegovina, entity and cantonal governments, women make only 23 women or 14,8%, which tells us about the absolute non-representation of women their complete discrimination, that is what the chairman of the Commission for Gender Equality of the House of Representatives of the Parliamentary Assembly of Bosnia and Herzegovina, Mirsad Isaković, stated today in Sarajevo.

According to his words, we cannot be satisfied with the current state of gender equality in the legislative and executive bodies of Bosnia and Herzegovina, since the current state does not reflect what the Law on Gender Equality provides, and that is a minimum of 40% of representation of both genders.

The complete article is available in B/C/S languages here.