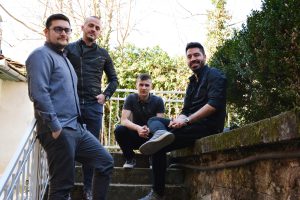 Sarajevo Open Centre is an independent feminist organization, with an emphasis on the feminist, and guess what – men also work for us. All jokes aside, for those who are not so well-informed (let’s hope they are a minority) feminism as an ideology, political and social movement is unfortunatelly often perceived as a movement that is strictly related to women, especially those identifying as feminists. Hoping that the feminism will soon be perceived as an ideology that contributes to a gender equal society, we present you with an interview with our four SOC musketeers – Jozo, Liam, Rasim and Darko.

You’re a man and a feminist, how come?

Rasim: How come, how come, how come… When I hear this question I get the mental image of the rapper Vojko V and his video depicting him in the game show Hunter being asked “Who is sabotaging us?” and trying to reply. My final answer is the patriarchy. My upbringing had the greatest effect on me, since I was primarily raised by my mother and grandmother. Both of them were, in traditional sense, both my mother and my father, my grandmother and my grandfather, male and female.

Jozo: I do not like to hear that question and the hidden assumption (and prejudice) that men and feminism do not go together. Of course I am a feminist, it is something natural and normal to me. I often hear uninformed attitudes that feminism means giving certain privileges to women, insisting that it represents something that is not natural, but for me such attitudes are  superficial. Feminism means equality. Equal opportunities regardless of sex and the same start position, are something that I am advocating throughout all my life. That is feminism for me. Therefore, I’m a feminist.

Darko:  It does not mean anything to me personally to call myself a feminist. On the other hand, if my colleagues think of me as a feminist, I would feel honored. I think the title of a feminist has to be deserved and justified every day. However, I am aware of the fact that calling yourself a  feminist in our society is a certain political act whose significance should not be diminished. Especially when one considers that many people today are pushing feminism into a negative or extremely radical context.

You work in SOC, which is a feminist organisation, so how do you interpret your role as a feminist?

Liam: Feminism is based on the principles of equality, and SOC is an organization that is guided by these principles. SOC employs different people, of different beliefs and identities, who advocate for everyone’s belief and identity to be seen as equally valuable. In this way, as a team, we contribute to the feminist struggle.

Rasim: I think it is essential that as men we are aware that we have the privileges women do not have in society and that we must take our share of responsibility by gradually abandoning a privileged position or by fighting for the equal position of men and women.

What are you doing every day (at work and private life) to promote gender equality?

Rasim: I open the door to both men and women hahaha… When I have the opportunity to choose or reward someone for something, I try to equally choose/reward both men and women. I vote in elections for the representatives of both gender. I try to use gender-sensitive language, which sometimes does not work for the best. Well, I do some of gender mainstreaming myself, if I can call it that way.

Darko: I believe that the feminist values are very close to me, such as respect for others, the promotion of mute and marginalized voices, and the resistance to tyranny and power. These values should also be lived every day in our micro environments or not at all. Starting from how you will behave towards the person that sells you bread to whether you will turn your head to obvious injustice  that does not consider you. As is often said – if you want to fix the world, start from your bed.  However, I often forget to make my bed, so I have plenty of room for improvement.

Liam: To explain what I like the most when feminism is concerned, I will have to quote Margaret Fuller, who said – ” Male and female represent the two sides of the great radical dualism. But in fact they are perpetually passing into one another. Fluid hardens to solid, solid rushes to fluid. There is no wholly masculine man, no purely feminine woman.”  That’s exactly what I like when feminism is concerned.

Jozo: Interesting use of the word ‘like’! 🙂 What I like is feminism. I like the history of the movement, full of passionate struggles that unfortunately, often ended badly for those who led them. I like all the lessons I can take from this history. Feminism for me is the space of freedom, the mechanism by which I come to my freedom and dignity, the way I fight for the freedom of other people, the way I act when I advocate towards the state and its institutions, a tool with which I find answers to questions and opinions that are full of prejudices and gender stereotypes.

Rasim: Equality. I have always been familiar with ideas that promote equal opportunities and lead to equal participation in public and private life regardless of belonging to any particular group etc. Here I already see how I will be characterized as a communist, so I will stop elaborating on this.

We all have prejudices, but it’s important that we are aware of them. Did you have any prejudices about feminism?

Darko: It’s not necessarily prejudice, but it irritates me when people have the need to criticize and speak loudly about things they know little or nothing about. That’s probably something I myself did in the past when it comes to feminism.

Rasim: When I first heard about feminism I thought it was something against men and I had a defensive attitude towards it.

Liam:  Prejudices in my specific case emerged from the lack of knowledge of feminist theories, and the differences between them. There are various theories of feminism, and thus various feminist movements, so I can not say that I now have prejudices about feminism, but  disagreements with some theories and movements that are not moving towards equality.

Jozo: I do not think I have any major /radical prejudice, although I personally believe that every person has some prejudices about someone or something. I really try to understand all feminist struggles and participate in them as much as I can. I was raised to respect women, and I must say that in my life, female figures have played a dominant role.

What are the funniest myths about feminism you know?

Liam: My favorite myth about feminism is  that feminists do not shave their legs, which is, I believe the most frightening to those who can not see outside of the frame of being a male or female. I have had countless discussions with people who are horrified by that assumption because – it is unthinkable for a woman to go out of the box of being a “lady”, while on the other hand men are forgiven everything because they do not fall into the category of  ‘more beautiful sex’. The very division of women and men into two categories of ”more beautiful” and “stronger” sex is the source of this myth.

Jozo: I would like to start from those commonly known and usually expressed  myths (actually, they are not funny at all) – that feminism threatens men, seizes power and their rights; that feminists are unfulfilled, masculine women who use their aggression against men; that feminists hate men and think they are superior; that feminism encourages women not to have a family, leave their partners, neglect the children. And this list is very long, unfortunatelly. I try daily to demystify these attitudes both through my work and in my private life, since the two are also intertwined. Because… the personal is political!

Darko: I do not know how fun they are, but most common ones are that feminists are a sect whose membership requires at least three cats, vegan diet and vibrant colors hair (or at least one hair strand in that color), also being a lesbian is a big plus, and of courste that – even if the guy is a feminist, he is gay or he wants to seduce a girl.

Rasim: I really don’t know how to reply this question. 😀