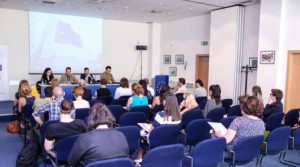 Sarajevo Open Centre (SOC) and Foundation Mediacentar organised today at the premises of the EU Delegation to BiH in Sarajevo, the Conference entitled ‘It is time for same-sex partnership in BiH’, that officially marked closure of the EU-funded project “Enhancing Lesbian, Gay, Bisexual and Trans (LGBT) rights in BiH in line with EU the standards”.

On this occasion, they presented the project results including the model law for the legal regulation of same-sex partnership in Bosnia and Herzegovina.

The project focused on the advancement of human rights of LGBT persons in BiH through the provision of free legal counselling, raising awareness on the necessity of strategic legal protection and addressing the shortcomings of the existing legislation, such as discrimination of same-sex couples.

The EU funded this project through the European Instrument for Democracy and Human Rights (EIDHR) in the amount of 184.840EUR. The project was from January 2014 jointly implemented by SOC and Mediacenter, and financially supported by Astraea Lesbian Foundation for Justice and Open Society Fund Bosnia and Herzegovina.

Massimo Mina, Head of the Operations Section for Social Development, Civil Society and Cross Border Cooperation at the EUD to BiH said “Protecting LGBT persons from discrimination requires the application of the principles of protection of human dignity, non-discrimination and privacy to all individuals. The EU stays committed to defending and promoting the values of equality, tolerance and respect for each other not only in the European Union but also worldwide”. 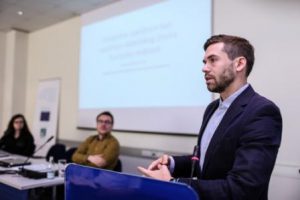 Goran Selanec, Deputy Gender Equality Ombudsman of Croatia said that BiH has an obligation to legally regulate same-sex partnerships, being a member of the Council of Europe and having the European Convention on Human Rights as an integral part of its Constitution which has precedence over national laws. Mr Selanec also pointed out that the European Court of Human Rights ruled in several cases on this issue, including in the case Oliari and others vs. Italy when it ruled that Italy violated the European Convention on Human Rights because of the absence of a legal framework recognising same-sex relationships. This judgment has set a precedent for any potential case against the countries which do not recognise same-sex couples’ right to family life, including BiH, concluded Mr Selanec.

Members of SOC presented the model law developed with the project which should be adopted at the entities level, and by which same-sex couples would be legally recognised but also have equal access to social and economic rights just like heterosexual couples have.

Representatives of the SOC and Mediacenter underlined that, although BiH has made certain progress in ensuring equality of LGBTI persons, more needs to be done in this area, especially on legal regulation of same-sex couples.They also stressed that LGBTI persons in BiH society are in unfavourable position, and discrimination against same-sex partnerships additionally deepens their social, economic and emotional problems. This makes a huge negative impact on their everyday lives due to lack of access to basic human rights such as housing, health and social care, etc. They expressed the hope that Bosnia and Herzegovina would follow the steps of countries in Europe and the world that regulated same-sex partnerships and their basic human rights.