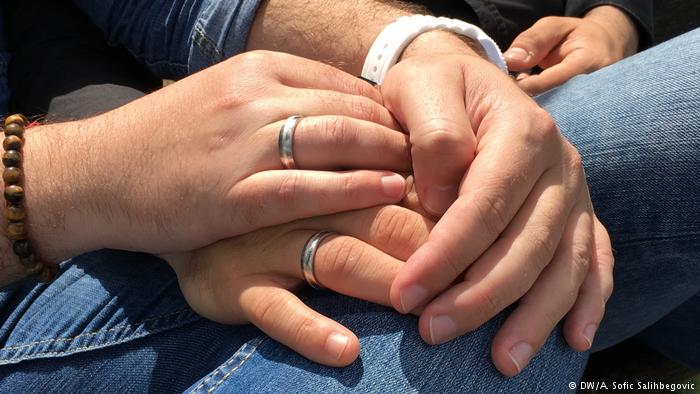 Fear of violence and discrimination is part of everyday life for the LGBTQ community in the Balkans. Same-sex couples often conceal their sexual identity. DW spoke to Haris and Lazar, who left their home countries.

Haris and Lazar (not their real names) have been a couple for two-and-a-half years. One used to live in Sarajevo and the other in Belgrade. They had to hide their relationship in Bosnia-Herzegovina and Serbia.

“If our parents found out, we would be a disgrace to them there,” explained Haris. That was one of the reasons they both decided to leave home.

“We never had any support from our families,” said the 25-year-old Haris. “They often said in passing that they do not by any means want a gay son. The most important thing to them was what the neighbors say about them or think of them.”

Because of such attitudes, Haris never dared to talk to his parents about his sexuality. It was the same for Lazar. Both men decided not to stay in an environment that did not accept them and made them live in constant fear. They moved to Frankfurt a year ago.

A gay pride parade has never been organized in Bosnia-Herzegovina. Even small LGBTQ events have been disrupted by violent attacks, including a festival in Sarajevo in 2008, and, six years later, Merlinka, the LGBTQ-themed film festival. The perpetrators were arrested but released soon after; no charges were filed.

In May, when the Sarajevo Open Center (SOC) decided to speak up for the LGBTQ community and organize a march for human rights, local authorities put an end to their plans. The permit for the march was issued so late that it was no longer possible to meet security requirements. “That gives the impression that homophobia and transphobia in Bosnia are tolerated,” the SOC said in a press release.

According to SOC’s Pink Report, the number of cases of domestic violence against LGBTQ people increased in 2016. Homophobia has also risen at schools.

“Parents often abuse their gay and lesbian children – psychologically and physically,” said SOC director Emina Bosnjak. “They lock them up at home and forcefully try to ‘heal’ them, as they say. Often, siblings are involved.”

At schools, violence is used to humiliate or intimidate anyone who does not conform to traditional gender roles.

Lazar and Haris have experienced this as well, although things are somewhat easier for gay people in Serbia than in Bosnia-Herzegovina.

“In Belgrade, there are many gay clubs and the Gay Pride Parade takes place there, albeit with strong police presence,” said Lazar.

In Serbia, human rights laws are applied to LGBTQ people. However, they are only “empty words,” according to Jelena Vasiljevic of Labris, a gay rights organization in Belgrade.

“Even though a lesbian – the new prime minister, Ana Brnabic – holds a top position in Serbia’s government, and despite existing laws that prohibit discrimination and violence, there are still many cases of violence and human rights violations that are not investigated,” said Vasiljevic.

‘The LGBT community does not live on an island‘

Neither Serbia nor Bosnia-Herzegovina has passed legislation that makes same-sex marriage or registered partnerships possible. However, the new Serbian government is expected to change that.

“We hope that during the new prime minister’s term, legislation for registered same-sex partnerships will be passed and the Serbian government will respect LGBTQ problems more,” said Vasiljevic.

The situation in Bosnia-Herzegovina is still far removed from developments in Serbia. The issue is not even on the government’s agenda.

“There have been some positive changes, but people have failed to recognize the fact that the LGBTQ community does not live on an island, but instead, in the middle of society,” said SOC director Bosnjak. “It not only requires protection from discrimination and violence; it also has needs in education, health care and in the workplace.”

Lazar and Haris did not wait until their home countries achieved equality. They moved to Germany and are now a registered same-sex couple.

“Here, we can show our love on the street without fear; we can kiss or hold each other’s hands. Maybe we can adopt a child someday,” said Lazar happily.

But the price for their happiness and peace of mind is leaving their home countries behind. And despite everything, they wish to remain unnamed. They believe it is too risky for their families back home for them to reveal their true identities.