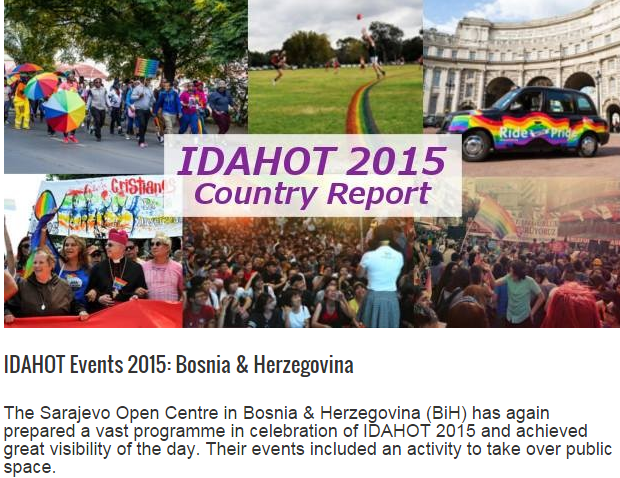 The Sarajevo Open Centre in Bosnia & Herzegovina (BiH) has again prepared a vast programme in celebration of IDAHOT 2015 and achieved great visibility of the day. Their events included an activity to take over public space.

In total, the Sarajevo Open Centre organized 11 events, and at least one of them is predicted to have a historical significance and impact – a thematic session in the BiH Parliamentary Assembly. More on its outcomes can be found here.

The organisers are kicked off their programme on May 6th with a seminar entitled ‘LGBT Human Rights In The Context of EU Integration: Seminar for the representatives of gender equality and human rights bodies in BiH’. The seminar lasted for three days and was supported by the Norwegian Embassy. During the three-day programme, leading experts from BiH, Croatia and Serbia have discussed problems, know-how and best practice from institutions in the region, hoping that this will lead to a stronger involvement of BiH institutions.

Part of the programme was also a countrywide online campaign, ‘FIGHT AGAINST VIOLENCE TOWARD YOUNG LGBT PEOPLE’, May 12th – June 16th. The campaign included a video clip about that highlights the problems LGBTQI students face.

From May 14th until May 24th there were activist-led actions in a public space, highlighting YOUNG LGBT PEOPLE. In the centre of Sarajevo, billboards with the universal message “Let people kiss whomever they want” were posted. A LGBT community event was organised. This activity was supported by the Swedish International Development Agency (SIDA).

Other highlights of the IDAHOT celebrations were a conference on same-sex unions/partnership in BiH, and the conference on trans* issues, which took place in Sarajevo May 31-June 2. The special guest for the trans conference was Susan Stryker, the Director of the Institute for LGBT studies at the University of Arizona (USA) and author of the book “Transgender History”, who – after the conference also gave several lectures in Sarajevo, Tuzla and Banja Luka.

As a final event of the great programme, an exhibition was hosted at the Art Gallery Collegium Artisticum (Skenderija) in Sarajevo. The Exhibition is titled “ALL HUMAN BEINGS ARE BORN FREE AND EQUAL IN DIGNITY AND RIGHTS” and was accessible from June 2nd till June 12th. The hopes are that the exhibition will be travelling on to Serbia but there is no confirmation at this point.

Following the Universal Declaration of Human Rights as well as the UN Yogyakarta Principlesfrom 2007 which encourage the legal standards for the protection, or the full realization of equality for LGBT persons, this exhibition seeks to present different levels of problems in achieving basic human rights for the people whose sexual orientation is different than heterosexual, through the documentary approach, while following the experience of the countries of the former Yugoslavia. Because of their sexual orientation alone, which is externally identified as their main feature, LGBT persons are relegated to the status of second class citizen, where they are exposed, often and in multiple ways, to discrimination and to the questioning of their humanity.

The Ambassador of the Netherlands in BiH released a statement in support of IDAHOT. You can find the full statement here.

As representatives of The Netherlands abroad, diplomats have a role in promoting acceptance, emancipation and worldwide protection of the rights of homosexuals, bisexuals and transgender people. That is not an easy mission, because these issues are sensitive issues in many countries and regions. We are aware of that and we respect that. But, as I said, considerations of tradition, culture and religion can never be sufficient to overrule the principle of the universality of human rights.

Even in countries that do not criminalize homosexual acts, gay people are often in a very difficult position – accepted for who they are by neither their family, nor their government, nor by society as a whole. Indeed, the realities of life can be harsh for LGBT people. They face major obstacles to enjoying their economic, social and cultural rights: discrimination, exclusion and even aggression are never far away. It happens at times that even where homosexuality is no longer a crime, authorities, like the police, discriminate. For instance, by not intervening in violent, homophobic incidents. This divide between legal and factual protection obstructs real equality.