On the occasion of May 17th – International Day against Homophobia, Biphobia and Transphobia (IDAHOT) – when, in 1992, the World Health Organization removed homosexuality from the list of mental illnesses, Sarajevo Open Centre is organizing an exhibition entitled All human beings are born free and equal in dignity and rights.

Following the Universal Declaration of Human Rights as well as the UN Yogyakarta Principles from 2007 which encourage the legal standards for the protection, or the full realization of equality for LGBT persons, this exhibition seeks to present different levels of problems in achieving basic human rights for the people whose sexual orientation is different than heterosexual, through the documentary approach, while following the experience of the countries of the former Yugoslavia. Because of their sexual orientation alone, which is externally identified as their main feature, LGBT persons are relegated to the status of second class citizen, where they are exposed, often and in multiple ways, to discrimination and to the questioning of their humanity.

Yogyakarta Principles are told through specific, geographically and sociologically close examples from the media, videos and photos, but foremost through the personal and emotional stories of persons who do not hesitate to transform the personal to political, committed to the betterment of the community. This involves nearly 50 persons whose love of life and courage to live it has marked, with honesty and through activism, (post)Yugoslav LGBT activism, paving the way for the fight against discrimination, clearly indicating that it is present in the entire society.

The exhibition will be held at the Collegium Artisticum City Gallery, Skenderija, June 2nd – 12th, 2015. 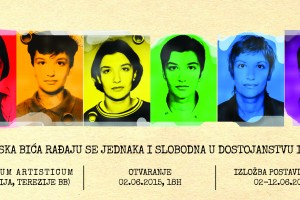 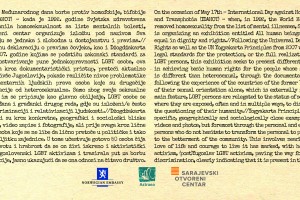