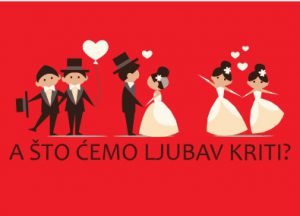 The Final Conference named It is time for same-sex partnership in BiH: Private and family life of LGBTI people of the EU-funded project “Enhancing Lesbian, Gay, Bisexual and Trans rights in BiH in line with EU the standards” will take place on Thursday, 30 June 2016.

Although Bosnia and Herzegovina has made relevant progress on achieving equality of lesbian, gay, bisexual, trans and intersex (LGBTI) people, same-sex couples and their relationship are still not legally recognized. On the other hand, international human standards are becoming clearer. The European Court for Human Rights ruled in different cases on this issue. On July 21st 2015 the Strasbourg Court found Italy to be in breach of the European Convention of Human Rights in the case of Oliari vs. Italy. This decision also binds Bosnia and Herzegovina who has recognized the jurisdiction of the Court as the only interpreter of the European Convention on Human Rights.

Goran Selanec, Deputy Gender Equality Ombudsman of Croatia will present the obligations BiH has regarding the regulation of same-sex unions in BiH, and members of Sarajevo Open Centre wil present the model laws developed for the entities of Bosnia and Herzegovina within this project. The Conference will be held at the premises of the Delegation of European Union to BiH and you can find the detailed agenda here.

The Conference is organised by the project-implementing partners, Sarajevo Open Centre and Foundation Mediacentar Sarajevo and it is funded by the EU through the European Instrument for Democracy and Human Rights, and financially supported by Astraea Lesbian Foundation for Justice and Open Society Fund Bosnia and Herzegovina.