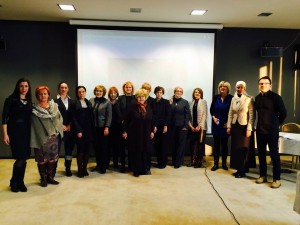 The goal of the meeting was to discuss the experiences and results of the process of implementation of the Program Platform for the cooperation between the women in Parliaments and the activists in the Civil Society Organizations in BiH, in the period 2010-2014, but also to define the priorities for cooperation between the legislative and executive branches and the NGO sector on the territory of Federation BiH, within the framework of the Program Platform for the period of 2016-2018. During the meeting the participants had an opportunity to exchange experiences, discuss burning issues, but also to agree on the new priorities for advocacy and cooperation for the upcoming period. 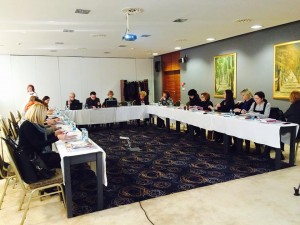 The working meeting resulted in the conclusions that for the upcoming two years the focus of the cooperation will be on the following issues:

– Draft Law on the Protection from Domestic Violence FBiH. The Draft Law on Changes and Amendments to the Law on Protection from Domestic violence FBiH was adopted on 2nd December 2015 in the House of Representatives of Parliament BiH and it was opened to public debate. The suggested amendments to the Law establish that safe houses have to be categorized as institutions, and that 70% of the funding for the safe houses is to come from the budget of the Federation BiH and the 30% is to be given by the Canton. These funds only cover the victims’ stay at the safe house. The representatives of the non-governmental organizations have emphasized that these changes and amendments are unacceptable, and that the working of the safe houses will be significantly hampered if the Draft Law is passed.

The participants in the working meeting reached the conclusion that an acceptable solution would be to include, in the changes and amendments, a provision stating that Safe Houses are to be formed according to the Law on Institutions, but also the Law on Associations and Foundations which would enable the existing safe houses to continue their work. Great concern over the financing of the safe houses was expressed at the meeting, and the proposals in the Draft Law, to fund only the victims’ stay in the safe houses are considered unacceptable. The participants at the meeting concluded that it is necessary to finance both the fixed and the variable expenses of the Safe Houses in BiH.

– Draft Law on the Changes and amendments on the Law on Basis of Social Protection, Protection of the Civilian Victims of War and Families with Children. This Draft proposes that the survivors of the conflict-related sexual violence are civilian victims of war, but that a five-member commission should also be formed to determine the status of a civilian victim of war. The participants in the working meeting consider that forming such a commission is impermissible and that that would only lead to further re-traumatization of the women who have stayed silent about their rape for years. They would be forced to face a five-member commission they are unfamiliar with, after speaking out about their rape. The question of what the makeup of the commission would be also arose – whether the members would have to be sufficiently sensitized to work with survivors of conflict-related sexual violence, what the criteria for their appointment would be, but the need for the Commission was also questioned, since the Institute for Medical Determinations has been determining the status of the civilian victims of war until now. 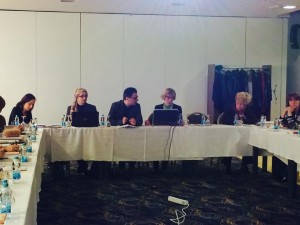 – Protection of motherhood and harmonization of the maternity benefits in Cantons of FBiH. The inequality between the maternity leave regulation and the maternity leave allowance within the Federation BiH clearly demonstrates the discrimination women in this entity face. A percentage of the maternity allowance is determined by the Cantonal regulation which has caused the payout of the allowance to be unequal at best, and completely non-existent in some areas of BiH. This disproportionately affects unemployed mothers who only have a limited claim over this right, which is determined by the Canton’s economic might.

In terms of this issue the conclusion at the working meeting was that we need to work towards harmonization of maternity allowance across the board, for all mothers in FBiH and that following in the Republika Srpska’s footsteps FBiH needs to establish a Fund for the Protection of Children which covers the maternity allowance. Special attention needs to be given to the category of unemployed mothers and allowing them to claim the right to maternity allowance.