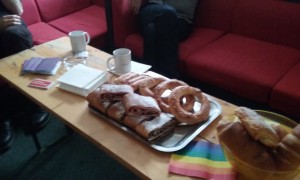 For the second year in a row, Sarajevo Open Centre continues to have regular meet ups with the LGBTI community mainly focused on Sarajevo region, but also open for LGBTI people and other LGBTI friendly people from other parts of the country.
The series of events that have started last year continued in 2016, so we have different cycles for different purposes:
– „Empower yourself“ is a series of workshops or debates where participants have the opportunity to open up to discussion, thinking and going through their own processes;
– „Tea gatherings“ is a series of different lectures, usually run by lecturers from the region, where we learn and discuss relevant LGBTI issues, or where we learn more about our history; and finally, the fun part is series called
– „Queers wanna have fun“ where we usually organize board games, competitions, barbecues, or movies night, to mingle and talk and just have fun.

From January until the end of July there were in total 12 Community Events, where our main goal is to empower lesbian, gay, bisexual, transgender and intersex people in our community.
In January we have opened a season with „Coming Out“ workshop that was dedicated to our inner processes of coming out to ourselves, living in a mostly homophobic and transphobic country, where due to all efforts people are still not feeling safe or comfortable enough to come out.
February was dedicated to learning about homosexuality in Yugoslavia, where we had a guest lecturer from Croatia, Franko Dota, who is a historian, and one of the founders of Zagreb Pride, who shared his insights from law regulations to general atmosphere back in the days. Many interesting facts came out from this gathering and it was one of the historic lessons that could not be missed. The second event in February was dedicated to activism, it was a workshop on activism run by Ana Brakuš, long term activist, lesbian and feminist from Croatia. The workshops covered the most important segments of activism in LGBTI field in our region – how to organize ourselves, what is the message we want to send, how far we can go and what tools can we use, to emphasize the state in which LGBTI people live. 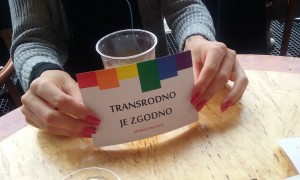 March was all about empowering people again – we had our dear guests from France, queer-feminist group who provides workshops on self-defence. It was important to have this workshop since there were some new attacks on LGBTI people in the center of Sarajevo in this period, and instead of living in fear we have worked on our psychical and psychological preparedness for living in our environment. Autodefense et Autonomie, provided us with another great workshop that lasted all day, with some new tips and tricks. The second event in March, was dedicated to Trans* Visibility day,
how does it feel to live as a transgender person in BiH, where we have talked about the current situation in the country and the region, in the process, transition, medical services and general atmosphere that has to do with everyday lives of trans* people.
We have also seen the movie „This is my child“, that was filmed four years ago and that features gay, lesbian and trans* people from BiH. One of the protagonists from the movie joined us, a former member of Q NGO, currently living in the USA and vividly remembering the events while living in BiH. This was also valuable experience sharing, for participants. We also had a director of the documentary with us.
In April it was time to break for some fun, and we have organized Tournament in Pictionary board game within the series „Queers wanna have fun”, and as a reward, we all went to see one of the great theater shows „If these walls could talk“. Speaking of art, our next event in April was dedicated to “Tea gathering” and one of the great lecturers, Nebojša Jovanović who took us through the timeline of Yugoslav classical movies with the emphasis on queer moments in it. As seen on the movie screen and having in mind Yugoslavian context at the time, these queer moments are very recognizable from this point of view and watching the movies again, especially movies from ex-Balkan territory will not be the same again.
In May we had guests from Kosovo discussing and comparing the situation of LGBTI people living in Kosovo and BiH.
The whole month of June was dedicated to Pride Parades and remembering of Stonewall as a milestone in LGBTI history for all of us. The movie screening „Stonewall Uprising“ is the documentary after which we discussed the real struggles LGBTI people went through in the late 60s and where we are now. The second event in June, was dedicated to Pioneers of LGBT movement in Yugoslavia, where we had two guests from Serbia Milan Djuric from Gayten and Ljiljana Zivkovic one of the co-founders of Labris NGO, two of the most prominent and well-known NGOs, and two of them as one of the first people who gathered the community, and organized the ever first Belgrade pride. Their personal stories, and feelings and looking back at those events and the courage they had were breathtaking and empowering.
Finally in July, due to demand from the community, and many people who come to peer-to-peer counseling there was a need to organize an empowerment event dealing with our sexuality and our spirituality. We discussed whether it is possible to be religious and spiritual and LGBTI person at the same time. We had a wonderful guest coming from Croatia, who were religious and queer people at the same time, who work immensely with LGBTI people back home. Again their stories, lessons learned and explanation of some religious texts were interesting and eye opening. Traditionally we have ended July, before August break, with the big queer barbecue. With barbecue, music, talks, laughs and dances, and mingling of people, we closed the season of events and we are getting ready for September.
In total throughout 12 events, we had 175 people coming to our events, out of which 44 people who came for the first time. Hopefully, everyone could find something for themselves.

Thank you all for coming and taking part in discussions, personal stories sharing, as well as having fun with us, in last seven months!
Do join us again in September, and please do send us your comments or feedback at [email protected] or write us if you would like to join our activist group, get some publications or you just want to come for a friendly talk over coffee or tea.
Our peer to peer counseling is always there for you when you are in need. For that, you can contact us at [email protected]
See you all in September! Enjoy the summer and stay safe! 🙂