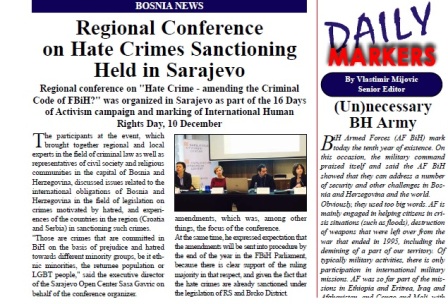 Regional conference on ”Hate Crime – amending the Criminal Code of FBiH?” was organized in Sarajevo as part of the 16 Days of Activism campaign and marking of International Human Rights Day, 10 December

The participants at the event, which brought together regional and local experts in the field of criminal law as well as representatives of civil society and religious communities in the capital of Bosnia and Herzegovina, discussed issues related to the international obligations of Bosnia and Herzegovina in the field of legislation on crimes motivated by hatred, and experiences of the countries in the region (Croatia and Serbia) in sanctioning such crimes.

“Those are crimes that are committed in BiH on the basis of prejudice and hatred towards different minority groups, be it ethnic minorities, the returnee population or LGBT people,” said the executive director of the Sarajevo Open Center Sasa Gavric on behalf of the conference organizer. He pointed out that the members of those groups are often targeted in attacks and that the situation calls for a prompt action – improvement of the legal framework and stricter sanctions in cases that are found to have been motivated by hate, thus providing protection to members of minority and vulnerable groups. Gavric said that it is necessary to access the corresponding amendments to the Criminal Code of the Federation of BiH, or develop and adopt specific amendments, which was, among other things, the focus of the conference. At the same time, he expressed expectation that the amendments will be sent into procedure by the end of the year in the FBiH Parliament, because there is clear support of the ruling majority in that respect, and given the fact that the hate crimes are already sanctioned under the legislation of RS and Brcko District.

Snjezana Ivandic-Ninkovic from the Associations for Democratic Initiatives (ADI), a member of the coalition for the fight against hate speech and hate crimes, also insisted on an efficient, adequate prosecution and severe punishment for crimes motivated by hatred. She warned that such crimes must be prevented and stopped, which is of particular importance for BiH in the context in which prejudice often has religious, ethnic, or gender origin.