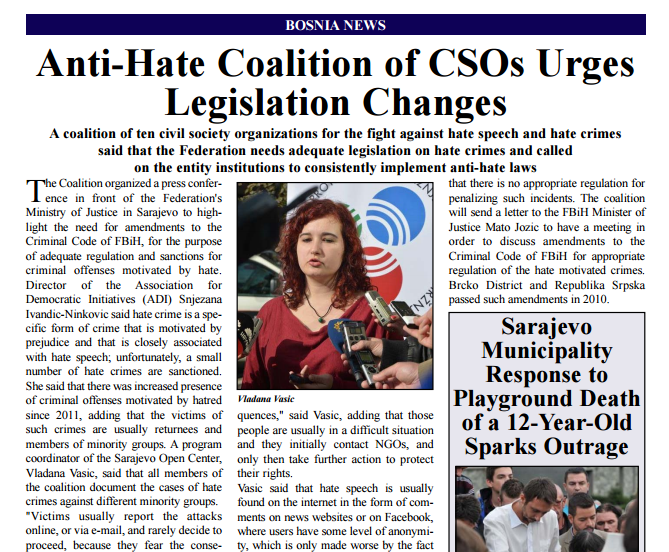 A coalition of ten civil society organizations for the fight against hate speech and hate crimes
said that the Federation needs adequate legislation on hate crimes and called
on the entity institutions to consistently implement anti-hate laws.

The Coalition organized a press conference in front of the Federation’s Ministry of Justice in Sarajevo to highlight the need for amendments to the Criminal Code of FBiH, for the purpose of adequate regulation and sanctions for criminal offenses motivated by hate. Director of the Association for Democratic Initiatives (ADI) Snjezana Ivandic-Ninkovic said hate crime is a specific form of crime that is motivated by prejudice and that is closely associated with hate speech; unfortunately, a small number of hate crimes are sanctioned. She said that there was increased presence of criminal offenses motivated by hatred since 2011, adding that the victims of such crimes are usually returnees and members of minority groups.

A program coordinator of the Sarajevo Open Center, Vladana Vasic, said that all members of the coalition document the cases of hate crimes against different minority groups. “Victims usually report the attacks online, or via e-mail, and rarely decide to proceed, because they fear the consequences,” said Vasic, adding that those people are usually in a difficult situation and they initially contact NGOs, and only then take further action to protect their rights. Vasic said that hate speech is usually found on the internet in the form of comments on news websites or on Facebook, where users have some level of anonymity, which is only made worse by the fact that there is no appropriate regulation for penalizing such incidents. The coalition will send a letter to the FBiH Minister of Justice Mato Jozic to have a meeting in order to discuss amendments to the Criminal Code of FBiH for appropriate regulation of the hate motivated crimes. Brcko District and Republika Srpska passed such amendments in 2010.