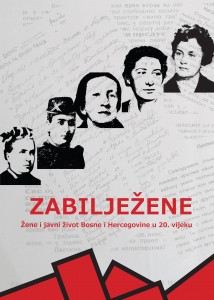 About women contribution in artistic, scientific, activists, cultural and other life spheres, as well as the challenges of working on book will be discussed by some of the book writers, such as Amila Ždralović, Elmaja Bavčić and Zlatan Delić. Conversation will be moderated by Jasmina Čaušević, book editor.

Promotion will take place on 09. 11. 2014. In 13:30 o’clock in Museum of Literature and Performing Arts of Bosnia and Herzegovina (Sime Milutinovića Sarajlije 7, Sarajevo) within official opening of PitchWise festival organized by CURE foundation.