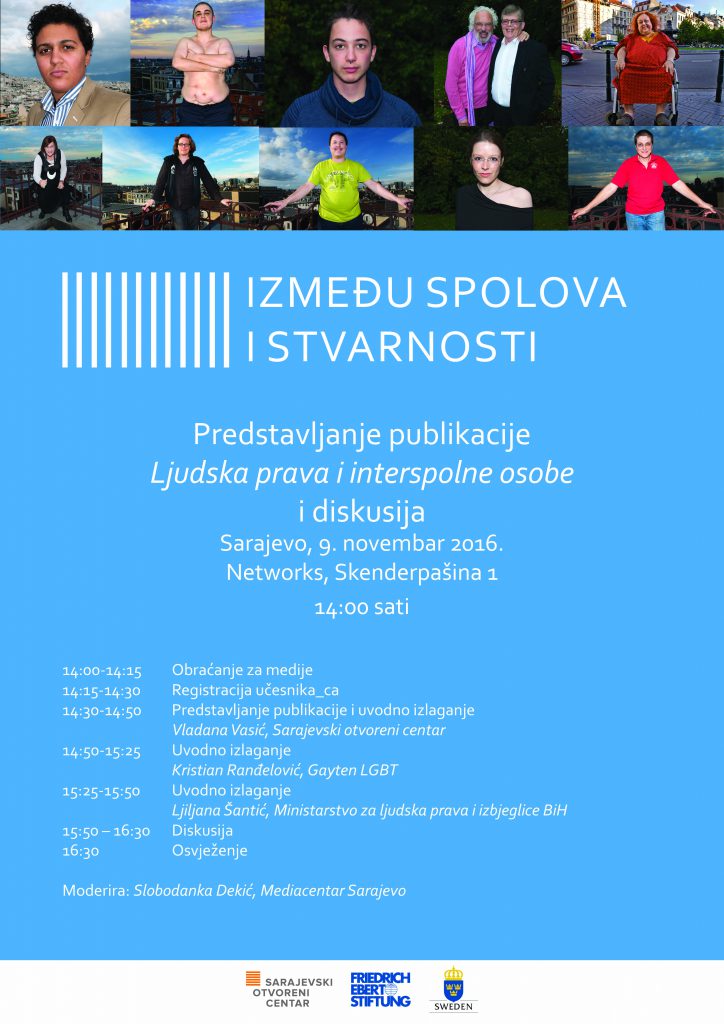 On the occasion of The Day of Remembrance of the Intersex People, Friedrich Ebert Foundation, BiH office, and Sarajevo Open Centre are organizing a presentation of the book “Human Rights and Intersex People” as well as the discussion. Event will take place  in Networks (Sarajevo) on the address Skenderpašina 1 with a beginning at 2 pm.

Binary classifications of sex and gender are omnipresent in our society and inform the way we understand and organise the world around us. When a newborn is welcomed into this world, the same question is repeatedly posed: „Is it a boy or a girl?“ This question indicates just how fundamental sex and gender classifications are to our society, as well as the binary manner in which the human sexes are categorised. The classification of humankind into two categories F (female) and M (male) and the entrenchment of those categories in identification documents, expose people who do not fit neatly into those two categories to human rights violations. Among them, intersex persons are especially vulnerable.

Differences can include the number of sex chromosomes, chromosome patterns, different tissue responses to sex hormones, or a different hormone balance. The genitalia of some intersex persons may not be clearly identifiable as male or female, and are hence easily identifiable as intersex at birth; however, for others the detection only occurs later in life during puberty or sometimes even later. Intersex people are routinely subjected to medical and surgical treatments, often while very young, to align their physical appearance with either of the binary sexes without their prior and fully informed consent.

The invisibility of intersex people in society is another serious problem. Their life experience is often shrouded in secrecy and shame, also as a result of their frequently being unaware of the surgeries or treatments that were performed on them early on in their life. Society remains largely ignorant about the existence of intersex people since hardly any information is made available to the public about the matter.

This issue paper aims to stimulate the development of a framework of action by suggesting a two-pronged approach. On the one hand, it calls on member states of Council of Europe to end medically unnecessary „normalising“ treatment of intersex persons when it is enforced or administered without the free and fully informed consent of the person concerned. On the other, it provides possible ways forward in terms of protection against discrimination of intersex people, adequate recognition of their sex on official documents and access to justice. The PDF version of the publication is available here.

Through the introduction of sex characteristics as a prohibited ground for discrimination in Law on Prohibition of Discrimination in BiH, human rights of intersex people are recognised in legislative of BiH. However, intersex persons are still facing big problems and their life is a struggle.

Through this event intersexuality is becoming the part of public discourse in BiH for the first time. It’s high time for intersex persons to stop being invisible, live free without prejudices and discrimination, to make decisions on their own body and to become fully respected members of our society.

Entrance to the event is free. You can find the agenda of this event on this link.