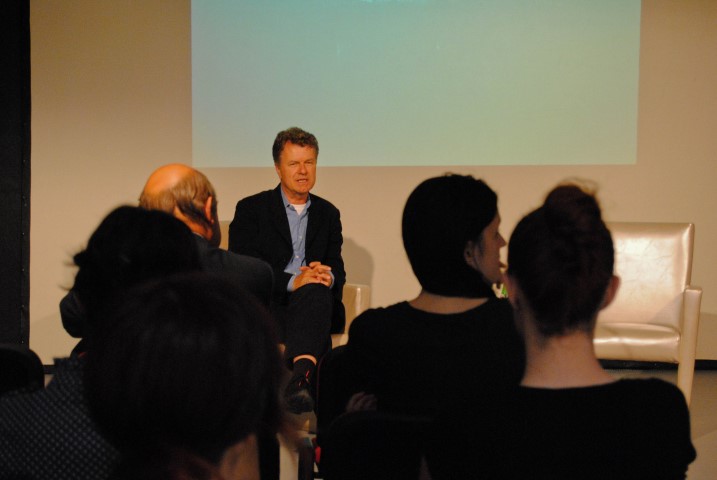 The director of the Human Rights Watch’s LGBT Rights Advocacy Program, Boris Dittrich who was the first openly gay MP in the Dutch Parliament gave a lecture in Sarajevo last week, on the state of LGBT persons’ rights in the world and how the HRW works on improving it.

At the beginning of our conversation Boris Dittrich, the director of the Human Rights Watch’s LGBT Rights Advocacy Program, says that he focuses on states where homosexuality is criminalized, but also on states with significant social pressures where the governments do not support the LGBT population.

DANI: How do you cooperate with state institutions?

DITTRICH: I begin by starting a dialogue. We discuss these issues, we compare that state’s principles with international legal principles, international conventions; we share information about other states and in that way help and support them. In one state, with one government, that results in very direct cooperation. Other times, when having meetings like that is challenging I use international bodies, like The Council of Ministers, The UN, The Human Rights Council and so on, to put pressure on those governments.

DANI: When it comes to the Balkan states, in what way do you work on advancing LGBT persons’ rights?

DITTRICH: Seven years ago, when I just started working, the HRW did not work on LGBT persons’ rights in the Balkans at all, so one of my tasks was to establish cooperation on all levels. So I am currently working on connecting activists in these states. I often meet them at conferences and then we exchange information, and then I schedule a visit. I was in Croatia, Serbia, Albania, Macedonia, Montenegro and now I am here, and I am also planning a visit to Kosovo later this year.

Anyway, the first step, for me, is to hear what the activists are working on, what problems they are facing and why they can’t achieve results – whether it’s because of politicians, institutions in that state, etc., and to see whether the HRW can help them and in what way. We know that many governments don’t like the involvement of the HRW because they feel as if they are under a microscope, but that is precisely our purpose. Because they should know that if they ignore a topic, if they just talk, but don’t act – someone notices and calls them out on it in different reports, or in some other form, whether it be interviews or pointing out that it is truly disappointing that the Ministry for Human Rights and Refugees still has not made LGBT persons one of their focus groups.

DANI: What have your experiences in this region been?

DITTRICH: A great example of good practice is Albania. During my visit I had a meeting with the then Prime Minister of Albania. While we were talking I made some suggestions and he agreed with them. I found that very interesting. Then he organized a press conference and told the media that he is for same-sex marriage, something we have not even discussed, although we talked about legal recognition of same-sex relationships. During the second visit we made a draft law on prohibition of discrimination, including sexual orientation and gender identity and the law was passed. However, having a law is one thing, and actually implementing it, is another. Generally politicians lose interest after a law is passed, because they move on to other things and do not monitor how the law is used in the state, which is important for NGOs. But in Albania, despite the ups and downs we can say that the law is working.

We also have to keep in mind that politicians, and I’ve been a politician so I know how it works, sometimes people who speak well, want to be good to the EU delegation, or to me, or to someone else, agree to something, but then when you leave they go back to doing what they were doing. I always speak to LGBT activists before speaking to the government. Because when you go to the government they can have wonderful stories about their hard work on these issues, but I prefer to hear the stories from LGBT activists and then to confront them with their lack of cooperation.

DANI: The HRW in BiH is currently at the very beginning of their work, trying to assess the situation. What have you learned so far?

DITTRICH: This is my first visit so I am under various first impressions right now. BiH has a very complicated structure, when it comes to bureaucracy, it’s hard, it’s especially difficult talking about a topic like LGBT rights, because it’s not a popular topic, there’s a lot of homophobia. Clearly there is a lot that needs to be done, but what I admire is the courage of the LGBT activists at the Sarajevo Open Center, because they are dealing with this topic in a very challenging environment.

What I have seen is that the government organizations like the Institution of the Ombudsman, are very weak. They should be protecting LGBT persons and be proactive, lead the social discussion on LGBT rights and needs, but they are not doing that. There are multiple obstacles in the society and that is why I am glad that I am here and that I am witnessing everything. For me that means a conversation with my colleagues when I return, because we have other divisions that work in BiH, through the Council of Ministers and OSCE, there are possibilities of putting international pressure on the government.

DANI: When you suggested marriage equality in 1994, what was the situation in The Netherlands like?

DITTRICH: I became a candidate for the Parliament in 1993 and the first comment that I got was that it’s great, but that I shouldn’t speak about my sexual orientation, that the country is not ready for an openly gay man. I told them that if they are telling me to represent those people, but that at the same time I cannot represent myself, then something is wrong. I can either be an openly gay member of the Parliament, or I won’t be a member of the Parliament. They agreed, but they thought that I wouldn’t be elected, but I was. During the campaign in ’93, someone talking about their sexual orientation was novel.

When I got elected we still didn’t have legal recognition of the same-sex unions, so I thought that we should aim at marriage and maybe we will get legal partnerships. That is what I suggested in 1994. I remember there were a thousand ‘buts’. And then the struggle started.

But I have to say that at that same time the Dutch LGBT movement, organization called COC, was against same-sex marriage. They told me they would not support me and I told them that this should be a matter of free choice. Because they disagreed, they were my opponents.

Anyway, a lot of time, talking, patience and strategizing was necessary. COC and LGBT persons joined me later, as did other members of the Parliament and then we had the majority in the Parliament, but the Government was still opposed. To cut the story short, after years of work I became the leader of my political party and got to the top and became the leader of the negotiating time. The other two parties wanted us to join them in a coalition, so they asked us what we wanted. I said that we wanted same-sex marriage, adoption rights for same-sex couples and singles and some other things and they agreed. It was included in the coalition contract and with a lot of effort the Law on Same-Sex Marriages was adopted in 2001. All the Christian parties in the Parliament were against it, but today, a lot of them have changed their opinion, because now there are generations of people growing up with same sex marriage and they do not understand that there is a time when they did not exist. I would say that for 85-90% of people in the Netherlands that is no longer an issue.

DANI: When you proposed the law did you think it was going to be passed?

DITTRICH: The fact that there were three of us from different parties really made a difference. We developed strategies in which we used our straight allies. They went to the public, made TV appearances: actors, writers, journalists and other people who were in favour spoke about equal rights and love. So, they helped us a lot. The biggest enemies were actually the people who said: you’re right, but this doesn’t exist anywhere else in the world, so why should we be the only ones. I am always proud when another country introduces marriage equality, because then I think of all the difficulties and obstacles that I had to overcome from 1994 to 2001, and now no one can say that this is impossible, because it is possible. And that is wonderful! When I had the meeting with the ombudsman he told us how difficult it is here, in this country especially with this organizational structure, but I don’t fall for that. Because if you really believe in something, you need to persist.

DANI: You work a lot in South America, Africa and Asia. What is the situation like in those countries?

DITTRICH: The first thing is that we work in specific countries only when the activists want us there, and that is very important, because when we do documenting of human rights abuses, we do so through researchers who interview victims, witnesses, policemen, politicians. They write the report and I, as the director of advocacy, go to the authorities with that report and tell them what is going on, and that they have to do something. When activists say that they don’t want that kind of a report then we don’t produce one, because it can be counterproductive. For an example, seven years ago, activists from Argentina invited me because they wanted to start a campaign for legalization of same-sex marriages and they wanted to talk about the rights of transgender persons. I went there a few times and gave a lot of interviews for TV and newspapers which sparked a debate – it became a huge part of the public debate on same-sex marriage, which was introduced and as you know, now Argentina is one of the leading countries in South America on this issue. They passed a great law on gender recognition for transgender persons and it is the most progressive law in the world.

Some people say: the world is so big and so hostile and I am just one LGBT person, what can I do, it’s too difficult?

I always try to explain to them that it takes a little courage, but every person, in their capacity can do something that will have a domino effect and that is why I always try to finish my lectures with a saying – The future is not in front of us, it is within us. The future is in you, and if you want to, you can be the one to start the change.