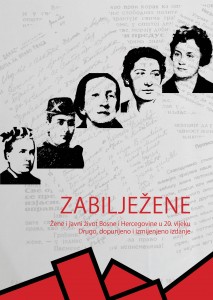 It has been more than a year since the book “Women Documented. Women and Public Life in Bosnia and Herzegovina in the 20th century” has started living and since the word about it has been spreading out. Many people, directly or indirectly related to the book, contacted us – praising our work, spreading the word about it, benevolently criticizing it, pointing out some factual mistakes, or argumentatively suggesting some alterations. In the meantime, we came to new data and added them to the new book. Therefore, what you have in front of you is the revised edition in which some of the mistakes, that had came to our attention, were corrected, and the edition was somewhere updated with new cognitions. In this process the authors of certain chapters, as well as Ms. Jadranka Miličević, deserve a special mention.

Living its own life, the book realizes its goals and, in an activist-academic manner, it problematises the transmission of knowledge and the affirmation of women’s work and existence, continues to contribute to the enrichment of the basis that will, in one place, collect new, current and conjoint knowledge, as well as connect and build a network of people who have the interest to deal with these subjects.

The publishing of the second edition of this book is supported by the Swedish Government via the Swedish International Development Cooperation Agency (Sida), helping spread the word of great women of Bosnia and Herzegovina.

The pdf issue of the book is available here.