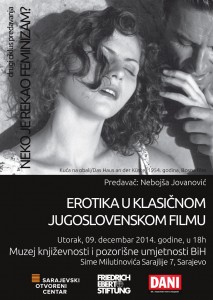 The last lecture within the second round of lectures titled “Someone Said Feminism?” brings the topic of erotica in the classical Yugoslav cinema, which will be presented by Nebojša Jovanović. The lectures are organized by Sarajevo Open Center in cooperation with Friedrich Ebert Foundation in BiH and with the media support of DANI magazine. While numerous studies on Yugoslav cinematography have their focus on the “new Yugoslav film” of the 1960’s, the classic Yugoslav film (1947-1962) has been neglected and associated with dogmatic social realism. This lecture questions such image of the classic Yugoslav film. Jovanović suggests a hypothesis in which erotica on film of that period offers “the royal path” for researches on gender/sexual regimes of the first decade of Yugo-socialist modernity. Various love stories together with the strategies of showing sexuality on film create a specific erotic imaginarium, which offers an insight into a dynamic development of different ideas and concepts of gender and sexuality in socialist Yugoslavia.

On the lecturer: Nebojša Jovanović explores Yugoslav film in the light of feminist film theories. He obtained his MA in Gender Studies at the Central European University in Budapest, where he is also about to defend his doctoral thesis on gender and sexuality in the classical Yugoslav cinema. His texts has been published in magazines like Hrvatski filmski ljetopis, KINO!, KinoKultura, and Studies in Eastern European Cinema.