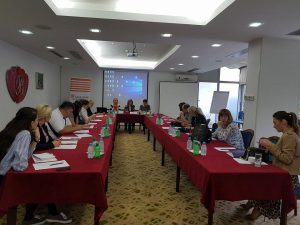 In Sarajevo was held workshop titled “How to achieve greater respect of human rights of women and LGBTI people in Sarajevo Canton?Together to the solution!” organized by the Ministry of Labor, Social Policy, Displaced Persons and Refugees of the Sarajevo Canton and the Sarajevo Open Center on June 20, 2018.

Minister of Labor, Social Policy, Displaced Persons and Refugees of Sarajevo Canton, Amela Dautbegović, in her introductory speach, expressed the need for discussion and work on the human rights of women and LGBTI persons in Sarajevo Canton, and highlighted some of the key problems and violations of human rights with which she meets in her work. The Minister pointed out that there is a great need for work on the operational plan for achieving real gender equality in Sarajevo Canton, as well as openness to cooperation. Executive Director of the Sarajevo Open Center, Emina Bošnjak, pointed out that the work on the human rights of women and LGBTI people in Sarajevo Canton already lasts for a longer period of time. The fact that none of the cantons of the Federation BiH has an operational plan for the implementation of the Gender Action Plan of BiH, as well as the fact that the kantons have some of the most important competences (labor, employment, health, education, social policy …) that are extremely important for the realization of basic human rights was an indication for the Sarajevo Open Center that the work on this issue must begin.

Years of work is worth it

In 2016, after the second generation of the Equality Academy, as a product, in cooperation with the Friedrich Ebert Foundation and the Sarajevo Open Center, a publication entitled Gender Equality in the Cantons of the Federation of BiH – Rules, Institutions, Policies, Author, Saša Savičić was created. This publication offers different modalities for solving the perceived problem – the lack of gender institutional mechanisms and operational plans for the implementation of the Gender Action Plan of BiH in the kantons of the Federation of BiH. During 2016 and 2017, a series of meetings, round tables and workshops were held with representatives of gender institutional mechanisms, civil society organizations, representatives of Sarajevo Canton as well as competent ministries. In November 2017, the Gender Equality Workshop in Sarajevo Canton was held where various solutions of the observed problem were discussed and which marked the beginning of cooperation between the Ministry of Labor, Social Policy, Displaced Persons and Refugees of the Kanton Sarajevo and the Sarajevo Open Center on the issue of human rights of women and LGBTI people in Kanton Sarajevo.

Together to the solutions