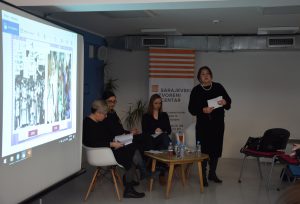 On the occasion of the International Women’s Day, the Friedrich Ebert Foundation in BiH and the Sarajevo Open Centre organized an interview on the topic of working-class women in BiH. Karolina Leaković, Suada Karić and Lejla Gačanica discussed on the topic, while Besima Borić was the moderator. The political system and the current social moment in which labor functions has changed significantly. Is the situation so black and whether there are any places of resistance and hope, was analizyed in the discussion in which it was said, among other things, about the position of trade unionists within the trade union, the struggle of workers for labor and social rights, the missed opportunity to learn lessons from the past, and the position of women in the labor market today, with a focus on the textile industry, as well as on the issue of dignity and health at the workplace.

At the very beginning, Besima Boric recalled the roots of the idea and symbolism on March 8th. Namely, the women of Bosnia and Herzegovina organized the first mass public event on March 8, 1913, on the International Women’s Day. This gathering turned into a protest rally where the gathering required, first and foremost, the economic and political liberation of women. On the meeting the complimentary telegram of Clare Zetkin was read, which was sent on behalf of the International Social Democrats. The celebration on 8th of March has become part of the culture of many countries, which have inherited ideas about the importance of workers, socialist, economic and political struggle against inequality, sexism and all other injustices arising from gender inequality. In 1977, the United Nations passed a resolution on the regular celebration of 8th of March as the International Women’s Day. 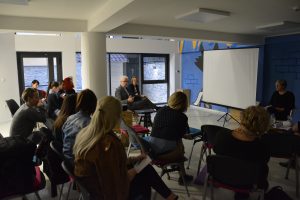 Karolina Leaković began her introduction explaining how the concept of an employee / worker began to disappear from public discourse in the 1990s, as it began to be considered almost embarrassing. There was also discussion about what it means that labor rights were alienated from the workers today. How much the language is reflected in the change in the political system is shown by linguistic situations in which workers are no longer earning their wages, but are provided by the employer, and where workers are no longer creating a new value, but they are given salaries and contributions. It was a matter of the system that everything worked so that the workers would not unionize, so as not to work collectively. Suada Karić, as a professor and educator, spoke about the consequences of leaving workplace dignity at the workplace, but also how the effects of mobbing, intimidation, dereliction and threats, which workers experience every day, actually spill over into society as well. Although there are legal mechanisms for the protection of labor rights, in practice they are not applied – it has been shown through numerous examples of everyday life. Lejla Gačanica, through the position of women in the labor market, is engaged in the current research work for the Helsinki Citizens’ Assembly (hCa) Banja Luka and through the discussion she presented some of the most important findings, comparing the textile industry in BH before the breakup of Yugoslavia, and showing – through numerous examples from the field – what’s the situation today. 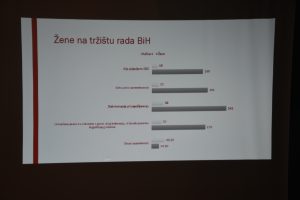 After the introductory lectures, a discussion was opened on which numerous topics were discussed – from why the workforce should not be a story of the past, what we have today from the cramped memories, working in the gray zone, and it emphasized the idea that the current small expectations of employers, where the sole responsibility is to regularly pay salaries and contributions, must be converted into different and more decisive union demands.