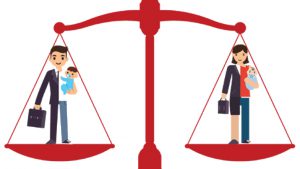 Times of strict gender roles stipulating that women are responsible for kitchen, children and household and men are meant to work hard to earn a living are luckily far behind us. Nowadays women are able to be politicians, work in economy or work for the army and likewise men are cooking, cleaning and changing diapers. – Are they?

With far more than half of the European women being employed and numbers rising, women are definitely entering the working world and young women are motivated to educate themselves and to live outside of their traditional role. Understandably, men should be motivated to take part in childcare and domestic work. We would like to believe it goes that way, but the actual situation looks different. Especially in terms of childcare, it might be hard for each parent to combine work and child care, so consequently responsibilities have to be shared equally.

Maternity leave policies provide a job protection and the right to leave work for mostly several weeks immediately preceding and following birth for mothers in most European countries in order to ensure the health of the mother and the baby and provide full care for the new born child. Paternity leave on the other side varies from fathers being entitled to leave for a few days so they can attend the birth of the baby up to several weeks to spend time with the new child, care for it and, before all, support the mother. Thereafter, parental leave or home care entitles parents to provide care at home and can often be combined with half-time work. The level of income support, duration and the possibilities to share the time equally between both parents vary from country to country.

Pregnant women can take off 7 weeks before and after birth and are paid 80% of their usual salary. Fathers are enabled to take off 10 days whilst they are paid 80% of their average salary. Both parents are entitled to 480 days of parental leave which are totally flexible to use. Though, 60 days are reserved for each parent. Furthermore, they are allowed to take off 10 days together during the baby’s first three months and another 30 days during the baby’s first year. During the first 390 days of their parental leave, they are receiving 77.6% of their average earnings and during the last 90 days 180SEK (EUR 18) per day. In 2013, only 24.8%[1] of Swedish fathers made use of their right to leave work in order to take care of their new children and support their wives, but numbers are increasing as in 2015 already 45%8 of fathers took off time. Furthermore, in 2002, Swedish fathers spend around 10% of their time with their young children whereas mothers spend around 18%9 of their time with care for household and children.

Mothers-to-be get 8 weeks before and 9 weeks after birth, meanwhile the father is entitled to 9 weeks of paternity leave of which 3 weeks can be used together with the mother, the remaining 6 weeks have to be used after the mother finished maternity or parental leave. The benefit for both parents depends on the amount of their previous salary, but the minimum daily benefit is EUR 24. Following maternity or paternity leave, the family is entitled to 26 weeks of parental leave. Again, the benefit varies depending on the previous salary of the parents, but the minimum daily benefit is EUR 24. Even though benefits and duration of the parental leave are very good in comparison to other European countries, less than 1.9%[2] of Finish fathers actually made use of it in 2012. Though, the percentage of fathers participating in childcare is slowly increasing as around 5%8 of fathers took parental leave in 2015. What is more, only around 5% of their time was spent on taking care of their children. Finish mothers therefore spent almost 15%9 of their time on children and household in 2009.

Since 1968, when the Maternity Protection Act (Mutterschutzgesetz) was passed, women can take off 6 voluntarily weeks before and 8 mandatory weeks after birth receiving full payment. Fathers are not entitled to a specific paternity leave, but it is possible to take parental leave for up to three years following maternity leave. Parental leave benefits of 67% of the average income of a parent are paid during the first 10 months. If each parent claims at least 2 months of benefit, they are entitled to 2 months of extra benefit. However, the parental leave can be taken part-time and the duration extended up to 24 months by reducing the monthly benefit level, so the overall amount stays the same. In 2008, 20.8%[3] of fathers in Germany took off time from work to spend time with their new family whereas in 2015 the percentage rose to 30%8. Furthermore, fathers spent around 8% of their time with their children and on domestic work in 2003, whereas mothers still spent more then 20%9 of their time at home.

Mothers are able to leave work 6 weeks before birth and obliged to stay at home for 9 weeks after birth receiving their full salary. Fathers-to-be are entitled to take off 10 days of which the first 3 days are fully paid. The payment of the remaining days is 82% of their previous salary. Afterwards, each parent is individually entitled to a parental leave of 4 months full-time, 8 months half-time or for one day every week over a period of 20 months. During that time, parents are paid EUR 780 per month. In 2002, only 8.3%[4] of Belgian fathers of Belgian fathers took parental leave to take care of their children and 2015 this percentage rose to 25%8. Moreover, in 2008 fathers spent 6% of their time with their children and in the household. Mothers in Belgium spent around 15%9 of their time with children.

Mothers-to-be get 2 weeks off from work before birth and 14 voluntary weeks after birth whilst being fully paid. Working fathers can take a fully paid paternity leave of 10 days and 3 extra days to attend the birth of the baby. Each parent is individually entitled to 6 months off work during the first 3 years of the child. The monthly benefit is around EUR 390 per parent. Both parents can take part-time leave together for 12 months with the monthly benefit being reduced or 6 months of full-time leave after one another. Even though conditions for leaving work are better than in many other European countries, less than 2%[5] of French fathers made use of their right to parental leave and until 2015 the percentage is only slowly increasing to 5%8. Furthermore, only 5% of their time was spend on taking care of children and household and mothers spent less then 15%9 on children and household.

All insured women, that contributed to the insurance system at least for 180 days during the last 7 years preceding birth or 360 days during their whole life time, are entitled to leave work 10 weeks before birth and obliged to stay at home for 6 weeks after birth whilst receiving 100% of their earnings. Fathers can stay at home for 15 days and will receive their full salary during that time. Unfortunately, parental leave for parents in Spain does not include any benefits. Their jobs are protected for the first year of the new born child and afterwards the job protection is restricted to a job in the same category until the third year of the child. Consequently, less then 3%5 of Spanish fathers took parental leave to care for their children and the percentage is only slightly rising with 5%8 of fathers taking parental leave in 2015. During the early years of their children, fathers spent almost 10% of their time with their children and in the household in 2010. Mothers spent more then 15%9 of their time on those things.

Insured and employed mothers can take off 15 weeks in total whilst receiving 100% of their previous salary. Fathers get 13 weeks in total which is a lot more than the average of what fathers in European countries get. The first 15 days fathers receive a payment of 90% of their usual salary, the remaining days a minimum wage is paid by the social insurance, which is around EUR 174 per month. Each parent gets extra 130 days of parental leave which can be transferred to the other parent, though. Parental leave can be taken until the child starts primary school and the benefit is 90% of the usual salary of the parent. In 2008, 5.6%[6] of Slovenian fathers took off time to be with their children and numbers are increasing as in 2015 already 10%8 of Slovenian fathers took parental leave. Moreover, in 2002, 10% of their time was spent caring for children or working in the household whereas mothers spent almost 20%9 of their time at home.

With 26 weeks of 100% paid maternity leave, Poland is one of the most generous countries for mothers-to-be. Fathers are entitled to 2 weeks of fully paid paternity leave.  Afterwards, the family is entitled to 26 weeks of parental leave. The benefit depends on the amount of benefit taken during maternity leave. Both parents can take parental leave at the same time, full-time or half-time with its length and benefit adjusting accordingly. Following parental leave, families are entitled to a childcare leave of 36 months, of which one month is reserved for each parent. Parents can leave together for up to 4 months during that time and receive a benefit of PLN 574 (around EUR 135) per month during the first 24months. In 2005, only 2.5[7] of Fathers in Poland made use of their entitlements and 2015 less then 5%[8], even though percentages are increasing slowly. Moreover, less then 10% of their time was spent on taking care of children or working in the household whereas Polish mothers spend almost 20%[9] of their time at home.

It might seem inexplicable why fathers would not use their entitlement to spend valuable time with their children and build a relationship, but at the same time it one gets the impression that women are still seen as responsible for childcare and spend in almost all cases more than double of the amount fathers spend with their children or in the household. Introducing paternity and parental leave for fathers can definitely increase the participation of men in domestic work and childcare and the uptake of parental leave by fathers is increasing year for year, but it is obvious that more equal and better conditions to leave for mothers and fathers have to be provided, so money or time will not hinder parents anymore from spending more time with their children. Moreover, paternity and shared parental leave does not only mean benefit for the father, but also for the mother, the new born child, the whole family and in the end even for the country’s economy as a balanced atmosphere at home is a condition for motivation at the working place. To come to a conclusion, more women at work mean more men at home in order to create a balanced and fair society that we are on the way to.

[2] Data according to National Institute for Health and Welfare and Social Insurance Institution of Finland, 2013

[6] Data According to the International Network on Leave polocies and Research, 2013

[8] Data according to the European Parliament, 2015