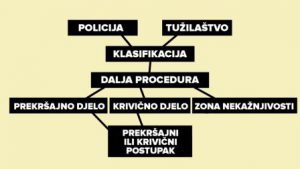 Special attention should be given to clarification of hate crimes, because, even if those are less dangerous incidents, they can be generators of conflict because they have the potential to escalate and can lead to an increase of tension in the community. When conflict, for which there is a doubt it could be committed out of hate and prejudice, happens, efficient response of the competent authorities is a signal to the affected community that appropriate measures are being taken and that these kinds of crimes are being treated seriously because of the possible  consequences that such an incident can leave. Effective prosecution of bias-motivated crimes is very important, in order to send a message that such crimes will not be tolerated. This will prevent future incitement of hatred against individuals belonging to certain social groups.

What we, as citizens, can do to combat hatred-motivated crimes?

In order to prevent and combat hatred-motivated crimes, each individual can make his or her own contribution. First of all, we can report these incidents to competent authorities and fully cooperate to help their efficient processing.

What if I am a victim or witness of a hatred-motivated crime?

It is important to emphasize again that reporting the crimes to the police or prosecutor’s office is a prerequisite for all next steps in the process.

In addition, everyone can act preventively.

Get involved and support the activities of the organizations and networks that combat hatred, hate crimes and promote tolerance.

Start initiatives in your local community to organize events that promote tolerance, coexistence, unity, and respect for diversity.

Through social networks and in your everyday life, spread useful information and positive news to break prejudices.

Contact local authorities, and build with them partnerships: introduce them to your work, promote the Action Plan on cohesion in the community if it is adopted or if there is one, or talk about the need to introduce such a plan in your community.

Report causing, encouraging and inciting hatred and violence that you encounter on the web portals to the Press Council in Bosnia and Herzegovina.

Report causing, encouraging and inciting hatred and violence that you see and hear on radio or television to the Communications Regulatory Agency of Bosnia and Herzegovina.