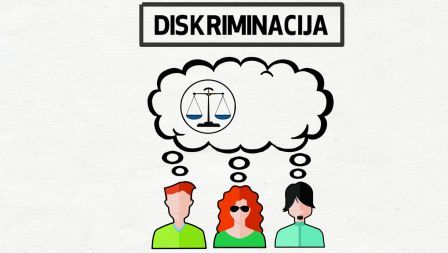 First, let us try to remember things we learned about stereotypes and prejudices. Stereotypes are unjustified, over generalized images about a certain group of people and assumptions that everybody in that group shares the same characteristics. As such, they are a product of human way of thinking and perceiving things and represent the need to simplify the world, which surrounds us. Stereotypes are not necessarily part of negative context.  On the other hand, we presented prejudices as a negative attitudes or convictions towards an individual based on his/her affiliation to certain social group. Prejudices are followed by strong emotions, based on unfounded stances and are cause of negative behaviour in a society. One of the most common forms of that negative behaviour is discrimination.

Discrimination is every form of unequal treatment or bringing individual to an unequal position in the process of exercising his/her guaranteed rights. That treatment is based on the personal characteristics of an individual or a group that is discriminated. Most often, those characteristics are race, ethnicity, nationality, religion, disability, gender, gender identity, sexual orientation, political affiliation and numerous others.

Bosnia and Herzegovina prohibited discrimination in 2009 by passing the Law on Prohibition of Discrimination which applies to public authorities (public institutions, companies, administration etc.) and to private sector and individuals. Violating regulations contained in this Law is sanctioned by paying fines.

Hate crimes as well as discrimination are based on prejudices. Just as perpetrators of a hate crime chooses his victim based on their personal characteristics such as race, gender, ethnicity, nationality, religion, political affiliation, sexual orientation, gender identity, etc. The same goes for discrimination. However, the difference is that discrimination means unequal treatment and bringing an individual to an uneven position while exercising their rights, on the other hand, hate crime refer to crimes that are defined as such in criminal code which were motivated by prejudice.

For eliminating prejudices as generators of discrimination and hate crimes, it is required to tend the tolerance and maintaining the dialogue between different groups and individuals. Education, raising awareness of the public, accepting the differences and effective response of the government are grounds for long-term solution in a fight against prejudices, discrimination and towards creation of healthier and stronger society for every citizen of Bosnia and Herzegovina.