Do you remember Hande Kader?

Hande is a 23-year-old, transgender activist who was brutally tortured, raped and burned this year in Turkey.

Add to this, another 294 transgender, transexual and gender-fluid people who are victims of hate crimes and transphobia, who were brutally murdered, tortured, burned, raped or where doctors refused to provide medical assistance and that are no longer with us.

On November 20, for eighteen years now, we memorialize victims of transphobia. Hate crimes towards transgender, transexual and gender-fluid people is on the rise. When we talk about Europe, where our country geographically belongs, most cases have been recorded in Italy and Turkey.

On November 20, we honour those who are no longer with us. This year, two hundred ninety-five of them. These are people who had their names, their identities, people whose lives were suddenly stopped.

This number should be added to those which we remember and honour, and who in recent years have been victims of transphobia. And these are only the cases that have been registered. How many more are out there, we may never find out.

We do not want to put stories of murders or hate into oblivion. We do not want transgender, transexual and gender- fluid people to remain invisible and stories about their lives and tortures they’ve been through remain untold.

In Bosnia and Herzegovina, we talk about the broad spectrum of transgender people. Often living double lives, they have difficulties to find jobs, even harder than the rest of the population of this country, sex- reassignment procedures do not exist in BiH, access to hormone therapy is almost impossible.

In BiH trans * people are faced with rejection from their loved ones, with domestic violence, school bullying and name-calling on the street, they are being homeless, and the system does not recognize them anywhere. Only after transphobic violence, they become just a number.

On 20th November we honour those who are not with us; we honour them for their courage to be who they are, with their names, gender identities and lives.

Also, we celebrate the lives of those who bravely walk and struggle daily with their families, the environment and stigmatization. 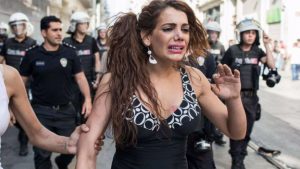 Today, and every other day we should talk about our brothers, sisters, friends, colleagues who are transgender.  Let’s respect and acknowledge each others with our names, identities and lives. Let’s support each other. Let’s talk about the violence that is happening.

Every year Transgender Europe (TGEU) issues the report with the latest data from monitoring of hate crimes towards trans * people.