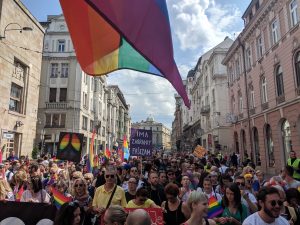 Marking 8 September, the date of the first BiH Pride March, will be included in the proposal for the Program marking the important dates in the field of human rights in BiH, the Ministry of Human Rights and Refugees announced in response to the request of the Sarajevo Open Centre.

Emina Bošnjak, Executive Director of the Sarajevo Open Centre, said: “We are pleased to see that the Ministry of Human Rights and Refugees has agreed to respond quickly to a request made directly by the LGBTIQ community, as well as to the date of local significance. This points to the fact that their orientation is not only nominal but is increasingly being addressed to the voices of lesbian, gay, bisexual, transgender and intersex persons in Bosnia and Herzegovina. The first Pride March is one of the key dates for LGBTIQ people in Bosnia and Herzegovina, and I think it is not an exaggeration to say that it already has historical significance for both the LGBTIQ community and BiH society in general, and represents the day of human rights triumph in BiH.”

The Program marking important dates in the field of human rights in BiH marks 17 May, the International Day Against Homophobia, Biphobia and Transphobia, as an internationally established day for the depathologization of LGBTIQ people. Institutional marking of dates important for the rights and status of LGBTIQ people contributes to the creation of an environment of acceptance of different sexual orientation, gender identity as general varieties of sexuality, and LGBTIQ persons as equal BiH citizens.