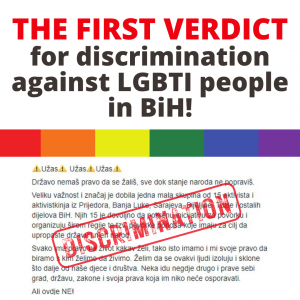 On April 4, 2022, the Municipal Court in Sarajevo issued a first instance judgement in which discrimination against LGBTI persons was confirmed by a court for the first time in Bosnia and Herzegovina. The judgement refers to a public statement made by Samra Ćosović Hajdarević, a former member of the Sarajevo Canton Assembly, on her Facebook page. Reacting to the announcement of the organisers of the first BiH Pride March, she posted the following status, which went viral and was covered by a number of print and electronic media:

“State! You have no right to complain until you improve the situation of the people.

A small group of 15 activists from Prijedor, Banja Luka, Sarajevo, Bijeljina, Tuzla and other parts of BiH earned prominence and significance. Fifteen of them are sufficient to launch an initiative and organise so-called pride marches aimed at destroying the state and its people.

Everyone has the right to live their lives as they like, but we also have the right to choose who we want to live with. I want people like these to be isolated and put away from our children and society. Let them go somewhere else and make a city, a state, and a law for themselves, and their own rights that no one will dispute.

Lejla Huremović, member of the Organizing Committee of the BiH Pride March says: “This verdict is very important because it has been proven that spreading hate speech and calling for violence against LGBTIQ+ persons in the online sphere (social networks) can also expand and affect the quality of life of LGBTIQ+ persons, or lead to physical violence. This is a confirmation that hate speech and incitement to violence on social networks, especially of public figures and politicians, is not permissible and can be sanctioned. In the spirit of this year’s BiH Pride March, which is on June 25, let this verdict be a warning to everyone that every hate speech and call for violence will be reported and that we will expect the same and similar verdicts.”

It should be emphasized that this is a first-instance judgement, not a final one. However, it is important to highlight and communicate it to the public for several reasons.

Furthermore, freedom of speech is not absolute, and people must be aware of the messages they broadcast to the public, as well as the repercussions of those messages. Although criticism or negative comments about LGBTI persons and the Pride March may be perceived as freedom of speech, public calls for the isolation, segregation and removal of individuals from society because of their sexual orientation, gender identity or sex characteristics are considered hate speech.

Finally, in a country where one in every three LGBTI persons claims to have experienced discrimination because they are lesbian, gay, bisexual, transgender or intersex, such messages are a positive signal that justice and protection may be obtained through institutions.

”From a legal standpoint, it is critical to develop case law and strengthen legal standards concerning discrimination and hate speech. The Sarajevo Open Centre is handling multiple lawsuits before several courts in BiH concerning topics such as rights related to same-sex partnership, freedom of assembly, discrimination and other LGBTI human rights issues. We believe that strengthening institutions and acting through the system is one of the key approaches when it comes to the fight for human rights, and we will continue to provide legal support for LGBTI persons.”, says Darko Pandurević, Advocacy and Programme Manager at Sarajevo Open Centre.