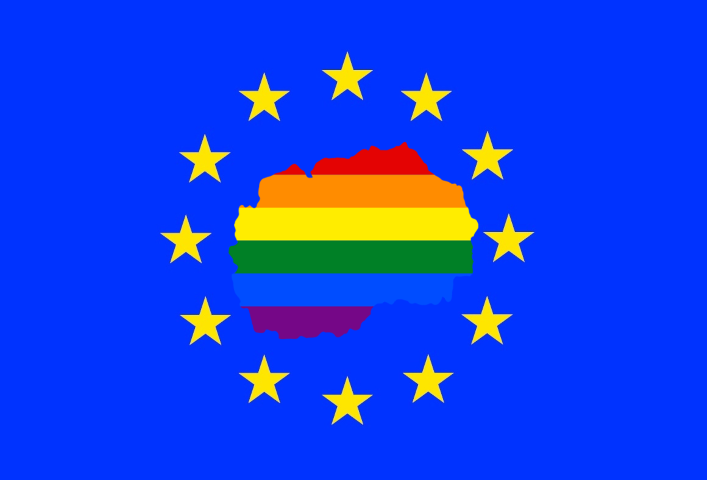 Subversive Front is writing a series of articles under the title “EU integration processes and advancement of the human rights and status of LGBTI people in Macedonia – challenges and perspectives” that are dealing with the EU integration in the context of LGBTI rights in Macedonia. Aims of these articles are following:

Brief timeline of the EU integration of Macedonia

EC reporting on LGBTI rights and status in Macedonia

The 2008 Progress Report[iii] was the first one that mentioned LGBT people, in this regard as victims of discrimination, which is a small but symbolic effort forward by the European Commission in recognizing the members of this community as a minority affected by the EU integration processes of the country. The 2009 Progress Report[iv] mentions not only the LGBT people as subject of discrimination, but also denotes that neither the Constitution of the country nor the existing legislation identifies sexual orientation as a ground of discrimination. In 2010, the Law on Prevention and Protection against Discrimination was enacted, which still to date does not contain sexual orientation as a ground of prohibited discrimination and thus does not fully comply with the acquis. The 2010 Progress Report[v] clearly detected this omission of protection against discrimination of the LGBTI people in the country, in addition to noting that “the quality of the dialogue on the law was low”, and that “the parliamentary debates were divisive and the remarks from civil society and the international community were not considered”.

The following 2011[vi], 2012[vii], 2013[viii], and 2014[ix] Progress Reports continuously note the lack of legal protection against discrimination based on sexual orientation thus emphasizing the lack of full compliance to the acquis. Even further, the rising violence against the LGBTI people has also been duly reported in these reports, as well as the homophobic content in university and high school books. Homophobic content in media and impunity of the SOGI-based violence has also been to a satisfactory level registered in these reports. In addition, the 2015 Report[x] reports on the unsuccessful August 2015 attempt to amend the Law on Prevention and Protection against Discrimination, which would have prohibited “any form of direct or indirect discrimination on the grounds of sexual orientation and gender identity”.

On 17th May 2016 was the first joint observing of the International Day against Homophobia, Biphobia and Transphobia[xi] (IDAHOBIT) by the Delegation of the European Union in Skopje, and the UNDP office in Skopje organized in partnership with Subversive Front – association for a critical approach to gender and sexuality from Skopje, Macedonia. This was also the one of the very first efforts of the EU Delegation in the country openly addressing LGBTI issues and strongly supporting the campaign for equal rights of the LGBTI in Macedonia.