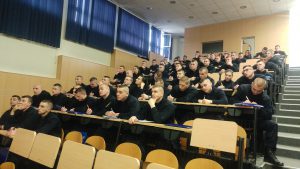 Thanks to a collaboration between Sarajevo Open Centre and the Police Academy of the Federation of Bosnia-Herzegovina, attendants of this educational institution got their first opportunity to systemically study the field of criminal acts committed out of hate.

The month-long educational session organized at the Police Academy enabled attendants of the fundamental police training for “Junior Inspector” and “Police Officer” ranks to learn about criminal acts committed out of hate and prepare themselves to appropriately react to such acts in their future professional encounters. A total of 213 attendants completed several modules covering important topics, such as: stereotypes, hate crime vs. hate speech, hate crime procedures and impact of hate crimes.

According to the Police Academy, these types of collaborations raise the quality of instruction and shed a light on issues that are only partly addressed by existing curricula. “In addition to raising awareness about the importance of responding appropriately to cases of hate crime, attendants also gained practical skills that will enable them to react properly when faced with these issues,” Police Academy representatives stated, adding that participants responded positively to the module.

“Participants expressed satisfaction with the implemented content and pointed out that the execution of this module enabled them to better understand these complex issues, as well as helping them uncover their own biases and understand the repercussions that transposing these biases into social expression can have on the wider community.”

Instruction regarding criminal acts committed out of hate was carried out within the framework of courses on Criminal and Misdemeanour Law, Criminal Proceedings Law, Criminalistics, and Police Affairs and Code of Conduct. The module was led by Marija Lučić-Ćatić, professor at the College of Criminalistics, Criminology, and Safety Studies and certified trainer for handling hate crimes. Lučić-Ćatić also notes that participants responded well to the content of the modules.

“Namely, in addition to the educational function, the whole concept was intended to sensitize participants in regards to groups that share certain protected characteristics, and which are, in our society, often neglected and marginalized.”

The most challenging topic for participants was that of hate speech and its distinction from hate crime, Professor Lučić-Ćatić explains.

“Taking into account the complexity of the legal construct of incitement to hatred, its view as a more severe form of hate speech, and its differentiation from criminal acts of hate, as well as the prior knowledge of the attendants, we can point out that the difference between hate speech and hate crimes, as well as the determination whether a certain act was a misdemeanour, a hate crime, or a criminal incitement to hatred, posed the greatest difficulty.”

Police Academy representatives say that, in addition to raising awareness about the importance of responding to cases of hate crime, it is also important that attendants gained practical skills that will enable them to respond appropriately when faced with these issues.

Considering that police officers are the first to arrive on the scene and establish contact with the victim and witnesses, the way they react is of utmost importance for the continued development of the case, Lučić-Ćatić explains.

“Their appropriate conduct in cases of hate crime is especially important in regards to the victim, the tendency of such crimes to escalate, and the entire community whose protected characteristics were the object of the attack. Furthermore, taking into account that police officers specifically are in charge of deciding whether a certain event is a misdemeanour rather than a criminal act, it is vital that they understand exceptionally well the entire concept as well as the importance of appropriate action in this realm,” Lučić-Ćatić concludes.

This text was produced as part of the project „Protecting Affected Communities: Improving the implementation of hate crime regulation in Bosnia and Herzegovina “which is implemented by Sarajevo Open Centre in collaboration with OSCE Mission to BH and financially supported by the Permanent Mission of the Kingdom of the Netherlands to the OSCE in Vienna.