A lot happens and a lot is done in ten years. Although it wasn’t an easy task, we picked out ten moments that shaped the work of Sarajevo Open Centre, as well as the human rights protection movement in BiH.

In 2009, together with Goethe Institute and the OSCE Mission to BiH (Education Department), and with financial support from HEKS (Hilfswerk der Evangelischen Kirchen Schweiz), Sarajevo Open Centre designed the textbook for “Culture of Religions”, a subject that had been included in school curricula in just three cantons of the Federation of BiH (Zenica-Doboj, Bosnian Podrinje and Sarajevo Canton). The textbook was designed in order to facilitate and improve “Culture of Religions” classes and was the first of its kind. All of the content in all chapters was presented from multiple perspectives, including the Jewish, Catholic, Islamic and Orthodox point of view. The main purpose was to get to know and understand the other. The textbook was authored by dr. Zilka Spahić-Šiljak and M.Sc. Dino Abazović, while Ivo Marković, Marko Antonio Brkić, Zorica Kuburić and Alen Kristić also played a role as contributors. 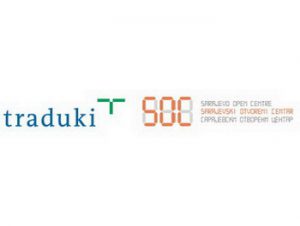 Sarajevo Open Centre and the Traduki Network for Literature ran the European Writers-in-Residence Program for Writers and Translators. Like other programs around Europe, it provided writers and literary translators, both young and renowned, with an opportunity to stay in the capital of Bosnia and Herzegovina for four weeks and participate in various literary activities. The goal of this two-year project was to enrich the cultural scene of BiH by promoting new, innovative programs and bringing in foreign writers and translators who wrote about their stay in Sarajevo, thereby becoming the cultural ambassadors of the city. On the other hand, the local audience became acquainted with the literary and translation work of the guest authors. During the project, Sarajevo Open Centre established cooperation with various embassies and the Goethe Institute in BiH. Authors and literary translators from Albania, Bulgaria, Montenegro, Kosovo, Macedonia, Romania and Serbia participated in the program. 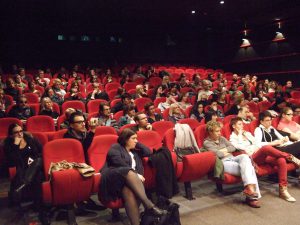 The screening of the film To je naše dijete by Elma Islamović was the first cultural event organised for LGBTI people in BiH after the attack on Sarajevo Queer Festival in 2008 and the disbanding of the Q Association. The screening was followed by a discussion on “What happens next with the queer movement in BiH?” This was the first event organised by SOC as part of its new program “Questioning – LGBTIQ Culture, Art and Law” supported by the Heinrich Böll Foundation. Marije Cornelissen, who was a member of the European Parliament at the time, also took part in the discussion. Different projects and events related to LGBT issues were organised throughout 2010 and 2011 as part of the “Questioning” program. 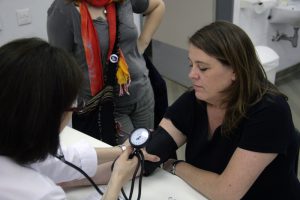 The initiative to change the blood donor questionnaire used in FBiH in order to remove discrimination against potential blood donors on the grounds of sexual orientation was the first successful advocacy campaign led by SOC. In 2012, SOC filed a complaint with the Institution of the Ombudsman of BiH warning about the discriminatory practice that came to fore in April 2012 when the media reported on a conflict between employees of the Institute for Transfusion Medicine of FBiH and students of the School of Philosophy who revolted against the discrimination. One of the employees even used physical force against students who tried to point out that the questionnaire was discriminatory. Unfortunately, an employee of the School joined the attack by verbally insulting the students. The incident occurred during a voluntary blood donation event organised at the School of Philosophy. It sparked positive reactions among the public who stood by the students, and the discrimination against LGBTI people in the questionnaire was soon removed.

The advocacy campaign was successful due to combined efforts of SOC, students of the School of Philosophy and other activists. SOC filed a complaint with the Institution of the Human Rights Ombudsman of BiH regarding the exclusion of “all persons who have had occasional or frequent sexual contact with homosexuals” from donating blood and, once it received a positive recommendation from the Ombudsman, began corresponding with the Institute for Transfusion Medicine of FBiH, while the reactions and protests of the students and activists fighting for the human rights of LGBTI people contributed to removing discrimination against homosexual and bisexual blood donors. The Institute for Transfusion Medicine of FBiH consulted members of Sarajevo Open Centre before releasing the amended questionnaire. The current questionnaire strictly prohibits blood donation from people who engage in high-risk sexual behaviour, regardless of sexual orientation. 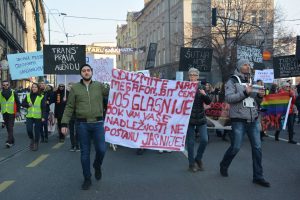 Our longstanding efforts and cooperation with civil society organisations that make up the Coalition for Combatting Hate Speech and Hate Crime resulted in the adoption of amendments to the Criminal Code of Republika Srpska in 2013, as well as the Criminal Code of the Federation of BiH. SOC and other members of the Coalition began working on amendments to the criminal codes of both entities in 2012, after news of a brutal attack against a young gay man in Mostar appeared in the media. It became clear that harsher punishments are necessary for crimes motivated by homophobia and transphobia, as well as nationalism or any other kind of xenophobia. In addition to focusing on improvements in the area of criminal legislation, SOC also began working on the legal protection of LGBTI persons against discrimination in 2012, trying to initiate the process of improving the existing Anti-Discrimination Law of BiH. SOC’s advocacy work, carried out through the Initiative for Monitoring EU Integration since 2015, resulted in the adoption of amendments to the Anti-Discrimination Law of BiH in 2016.
Amendments to the criminal codes, as well as the Anti-Discrimination Law of BiH have enhanced the human rights of all citizens of BiH and the protection of LGBTI persons against hate-motivated crimes. The amendments to the criminal codes of both entities foresee harsher sanctions for hate-motivated crimes committed against LGBTI persons on the grounds of their sexual orientation and/or gender identity. This sends a clear message that prejudice and violence against minority groups will not be tolerated. Amendments to the Anti-Discrimination Law of BiH include a clearer definition of “sexual orientation” and “gender identity” (when the original Law was adopted in 2009 the terms “sexual orientation and expression” were used). They also prohibit discrimination on the grounds of sexual characteristics against intersex persons. 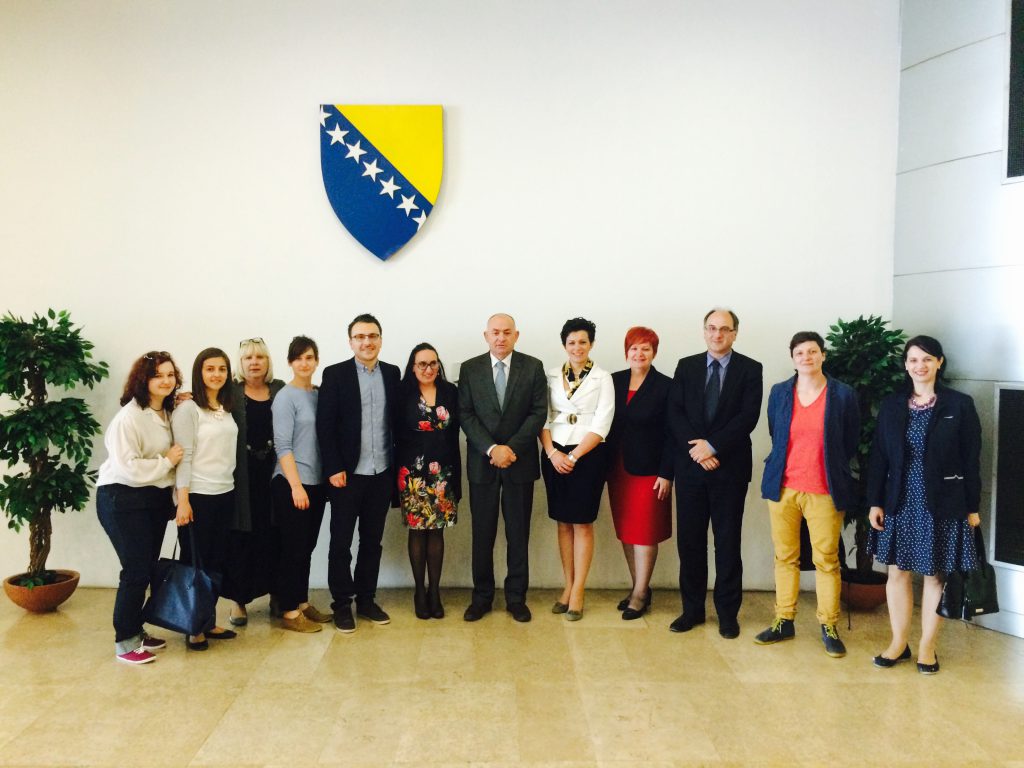 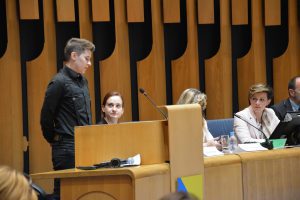 The thematic session in 2015 was the first time a government institution discussed the human rights of LGBTI citizens in BiH. It resulted in the Special Report on the State of Human Rights of LGBTI Persons published by the Institution of the Ombudsman of BiH in 2016. The session was co-prepared with the Joint Commission for Human Rights of both chambers in the Parliamentary Assembly of BiH. Sarajevo Open Centre, together with other civil society organisations, initiated the drafting of this report back in 2013 and held talks with the Institution of the Ombudsman. However, the Institution drafted the report only when it received a clear signal from the Joint Commission. It was the first time an institution in BiH released a report that systematically analysed the legislation of BiH, elaborated on the human rights violations against LGBTI people in BiH and issued recommendations to institutions on all levels of government on how to prevent such violations.

The thematic session held in May 2017 was the first one dedicated to human rights of transgender persons in BiH and featured a trans activist who spoke about the legal recognition of gender reassignment. The session was organised in cooperation with the Joint Commission for Human Rights of both chambers in the Parliamentary Assembly of BiH, the Gender Equality Commission of the House of Representatives of the Parliamentary Assembly, the Gender Equality Agency of BiH and the UNDP Office in BiH. The thematic session focused on discussing the report on the state of human rights of LGBTI people drafted by UNDP, as well as the human rights of transgender persons and the issue of legally recognising the effects of changing one’s gender identity or sex. The participants were introduced to SOC’s model of the Gender Identity Law and they also heard from Liam Isić, a transgender rights activist, who spoke about his personal experience.

After the general election of 2014, the Council of Ministers of BiH, as well as cantonal and entity-level governments were formed with complete disregard to the provision in the Gender Equality Law of BiH that is supposed to ensure gender equality in the executive branch by prescribing 40% representation of the underrepresented sex. Two women and seven men made up the Council of Ministers, while the governments of the Zenica-Doboj and Herzegovina-Neretva cantons included no women ministers in the 2014-2018 term of office. The 2014 general election did not result in a higher number of women in the legislative branch either – women took up 19.90% of government positions on all levels.

That same year, Sarajevo Open Centre proposed amending the Law on Amendments to the Election Law of BiH in order to increase the number of women in the legislative branch. The proposed amendment would have made it mandatory for political parties to have an equal number of men and women candidates (50% per cent each) and alternate between the names of male and female candidates on the list. The parties that failed to abide by this provision would not be able to take part in the election. The Gender Equality Commission of the House of Representatives of the Parliamentary Assembly of BiH accepted the proposal and drafted the bill. However, it was not approved at first reading.

On 8th March 2016 the documentary play Seven, based on interviews with seven women’s rights activists from all over the world who spoke about violence against women, was performed during a thematic session on the “Current State of Women’s Human Rights in the Federation of Bosnia and Herzegovina” organised by the Gender Equality Commission of the House of Representatives of the Parliament of FBiH in cooperation with Sarajevo Open Centre and Medica Zenica. The text was read by seven MPs of the Parliament of FBiH: Alma Kratina, Darijana Katić, Damir Mašić, Dennis Gratz, Jasna Duraković Hadžiomerović, Kenela Zuko and Vesna Švancer. 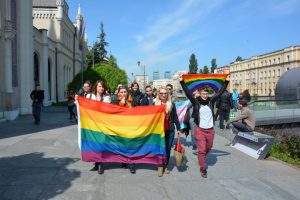 Sarajevo Open Centre commemorated the International Day Against Homophobia, Biphobia and Transphobia (IDAHOT) on 17th May by handing out brochures on the symbolism and significance of the date to members of the Parliament of FBiH, as well as issuing a call to MPs and the government of FBiH to make an honest, unequivocal commitment to enhancing the human rights and equality of LGBTI persons. The following five demands were presented:

In addition to members of Sarajevo Open Centre, other representatives of the civil society, LGBTI rights activists and their supporters also took part in the event. After handing out the material and giving media statements the activists, who were buoyed by the atmosphere and the positive reactions of several MPs, spontaneously organised a walk down Obala Kulina bana from the building of the Federation of BiH to Čobanija Bridge, with rainbow flags held up high. No incidents occurred, other than a few comments from passers-by and the crowd dispersed at the bridge with no problems. The walk was covered by all media outlets and became known as “level 0 pride” or “Sarajevo’s miniature pride”. 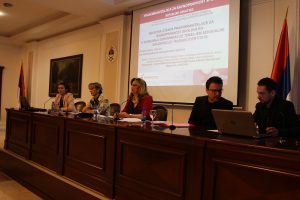