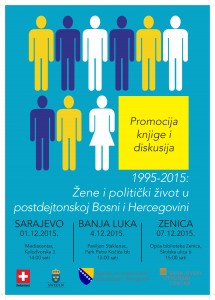 2015. marks the 20th anniversary of the Dayton Peace Agreement signing. Most of the activities that will mark this event will mainly focus on the past war, peace building and the progress that Bosnia and Herzegovina has achieved in the post-war period. Sarajevo Open Centre offers a different perspective, and thus puts an emphasis on women and their role in the politics of our country, as presented in the book “1995-2015, Woman and political life in the post-Dayton Bosnia and Herzegovina”, by the authors Marina Veličković, Arijana Aganović and Edita Miftari.

In order to mark the anniversary of the signing of the Agreement, as well as the book promotion Sarajevo Open Centre is organizing book promotions in three cities of  BiH:

Book promotion in Sarajevo will be held on 1.12.2015. in Mediacentar, at the adress Kolodvorska 3 at 2 p.m. On this event will be organized a round table, where together with the women whose stories are represented in the book, we will discuss about main Bosnian-Herzegovinian politicians, key activists and remember and recall  events in the last 20 years. This event is organized in partnership with Agency for Gender Equality of  BiH. Panelist and speakers will be Ismeta Dervoz, Besima Borić, Nada Tešanović, Maja Gasal-Vražalica, Arijana Aganović and Marina Veličković. Moderator will be Saša Gavrić.

Book promotion in Banja Luka will be held on 4.12.2015. at Muzički paviljon Staklenac at the adress Park Petra Kočića b.b. at 1 p.m. This event is organized in partnership with Helsinki Citizens’ Assembly (hCa) Banja Luka. Open discussion will follow the book presentation. Panelists and Speakers will be: Marina Veličković, Dragana Dardić, Nada Golubović and Nada Tešanović. Moderator will be Sadžida Hadžić.

Book promotion in Zenica will be held on 7.12.2015. at the Public Library Zenica, at the adress Školska 6 at 3 p.m. This event is organized in partnership with organizations Medica Zenica and Centre for Legal Assitance for Women. Open discussion will follow the book presentation. Panelists and speakers will be: Arijana Aganović, Sabiha Husić (Medica Zenica) and Nermina Zaimović Uzunović (SDP). Moderator will be Maida Zagorac.

The entrance on all promotions is free.

More about the book you can read on the Sarajevo Open Centre’s web page (www.soc.ba). Book in pdf you can find following this link.

The implementation of this activity is supported by the Swiss Embassy and the Swedish government through The Swedish International Development Cooperation Agency (Sida).