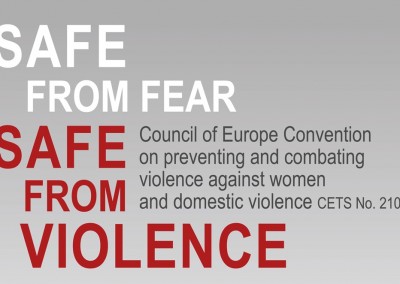 In this way Bosnia and Herzegovina became one of the first countries in Europe which adopted public-political document for implementation of Istanbul Convention. This leads to obligation of BiH to combat violence against women and domestic violence.

Convention on preventing and combating violence against women and domestic violence was adopted in Istanbul on 11th May 2011. After many recommendations of Council of Europe on the prohibition of gender based discrimination and protection from violence, which were aimed to set common goals and common minimum standards for the Member States, but which did not have a legally binding effect, the Convention is the first legally binding act of the Council of Europe in the field of prevention and combating violence against women. This document may not be directly applicable in the States Parties, but for its successful implementation special adaptation of legal and institutional framework of the States Parties is required.

On 7th November 2013. BiH become 6th state party of Council of Europe which ratified this Convention. In this way BiH became obliged to take legislative and other measures to ensure the legal, institutional and organizational framework in order to prevent violence against women, to protect victims and to punish perpetrators of violence