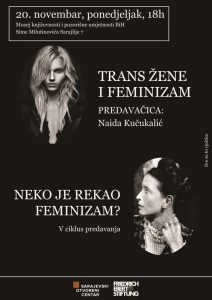 We invite you to the last lecture within the cycle Somebody said Feminism?, the topic being Trans*women and Feminism, and the lecturer being Naida Kučukalić. There will be talk about how feminism, especially radical feminism, does (not) include trans* women and their issues in its struggles. Referring to research, knowledge and experience she gained through her vast work, among others, with trans* women, Naida will talk about the relation between the contemporary feminist and transfeminist currents.

Naida Kučukalić was born and grew up in Sarajevo, where she currently lives and works. In the last 15 years she has been working with young people and marginalized groups in and out of BiH, via workshops, discussions, counselling, regarding the topics of sexuality, sexual health, human rights of LGBTI persons and discrimination. The focus of her work, reading and action are human rights through the prism of feminism, women’s issues, with the aim to achieve equality and to empower individuals. Naida had begun her field work as a peer educator in the Association XY, in 2002, and since then had worked mostly with the UN Population Fund (UNFPA) in BiH, Bulgaria and Egypt (where she also worked and lived for some time), and had continued her work through the programmes of GIZ, Bayer and Sarajevo Open Centre, where she mostly worked with the LGBT community.