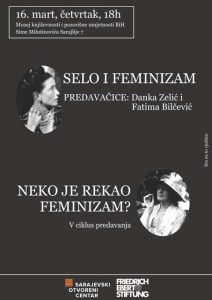 Sarajevo Open Centre and Friedrich Ebert Foundation in Bosnia and Herzegovina in 2017 organise 6 lectures in the scope of the fifth cycle of Somebody said feminism?!, whose topics will be related to rural life, pornography, poverty, rap music, cyber revenge and trans* women.

Danka Zelić was born in 1973 in Livno, she is B.Sc. in agronomy. For 17 years she has been actively working in the NGO sector, she is an activist and feminist. She is the founder and director of the Association of citizens Grahovo that has been operating since 2000. She advocated for higher involvement of women in the political and social life, higher participation of women in all spheres of society, women’s equality and the protection of women’s rights. Through her work in the NGO sector she advocates for the help and care for women refugees who are extremely marginalized and for women in the rural areas. The motto of her work is peace and reconciliation of peoples, citizens in BiH. She won the Peace Award BiH for 2015 that is awarded by the Peace Network, and in 2014 she won the world women’s creativity in rural life award by WWSF (Prize for Womens Creativity in Rural Life 2014). She is active in the Canton 10 and in whole BiH through the BiH Women’s Network where she has been present since the start and is also a member of its Coordination Board. She is also a member of the BiH Initiative “Citizens for Constitutional Changes” where she has been active for 4 years.

Fatima Bilčević was born in 1992 in Zenica where she finished primary and high school. Last year she ended her MA studies on the Faculty of Philosophy, Department of Comparative Literature and Library. She writes and publishes literary, film and theatre critics and essays. She won the second award for literary critic on the First international festival Bookstan.