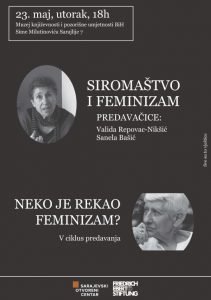 We invite you to the lecture within the cycle Somebody said Feminism?, the topic being Poverty and Feminism, and the lecturers being Valida Repovac Nikšić and Sanela Bašić. In the first part of the lecture there will be talk about the definitions of poverty and the ways of its measurement. Regarding these issues the lecturers will present different sociological theories about poverty, with the special attention on the ones that reflect on gender and poverty. The second part of the lecture will be dedicated to the work of the sociologist Saskia Sassen who deals with issues of social exclusion in the contemporary globalised world.

Valida Repovac Nikšić was born in 1977 in Sarajevo. She holds a PhD from the Faculty of Political Science of the University of Sarajevo, where, at the Department of Sociology, she teaches Contemporary Theories of Nation, Sociology of Globalisation and National Identity and Sociology of Poverty. She is the editor of the magazine Sarajevo Journal for Social Issues (SSSR).

Sanela Bašić was born in 1975 in Ivangrad. She holds a PhD from the Faculty of Political Science of the University of Sarajevo, where she teaches: Social Work History in BiH, The Basics of Social Policy, Poverty and Social Exclusion, Domestic Violence, and Social Work Ethics. She is a member of the Executive Board and the secretary of the European Association of Social Work Faculties (EASSW).