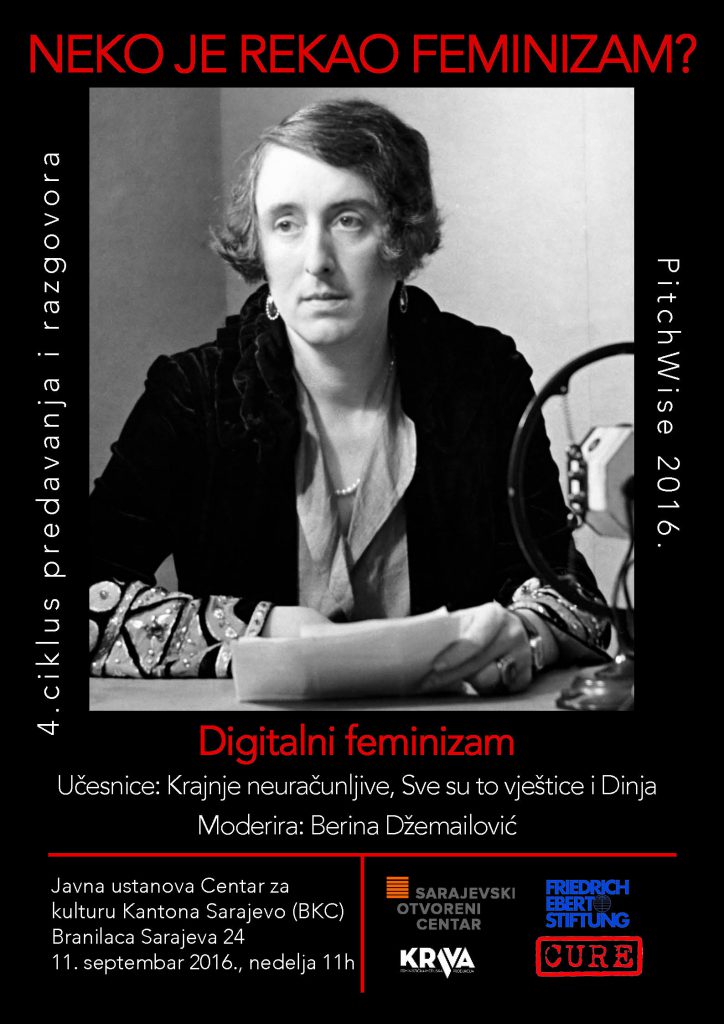 Sarajevo Open Centre and the Friedrich Ebert Foundation in Bosnia and Herzegovina will organize 6 lectures in 2016, which will cover the following topics: Antifascist Women’s Front Archive BiH, ideology and language, challenges facing feminism today, digital feminism, the relationship between right wing and feminism and reproductive rights.

We are honored to invite you to the fourth lecture within the 4th series of lectures and feminist discussions Somebody said feminism?, the subject being: Digital feminism. The speakers will include Facebook stars of the new generation – Krajnje neuračunljive (Marina Veličković), Sve su to vještice (Hana Ćurak) and Dinja (Sandra Silađev), and the moderator of the discussion will be Berina Džemailović (KRIVA). This lecture we organise in cooperation with the CURE Foundation, in the scope of Pitchwise – Festival of women’s art and activism.

The lecture and discussion will tackle the phenomenon of feminism online (on social networks), primarily Facebook and Instagram, and how this type of feminism corresponds with activism. There will also be discussion on the possibilities and reach of the interactive popular feminism, and about what each of the lecturers, through their medium, do and the challenges they face.

Dinja is a fictional character. Dinja represents everything that socially acceptable behavior is not. Dinja is the person from the margin. Dinja is an outsider, Sandra is a parent, Dinja is a gentleman, Sandra is a lady.

Marina Veličković has obtained MA degree in Law in 2015 without the least intention to be a lawyer. She is a freelance translator/interpreter, researcher and writer (a-woman-who-occasionaly-writes-texts-that-someone-occasionaly-reads-mainly-about-feminism-and-when-they-are-not-about-feminism-they-turn-out-to-be-about-feminism). She launched the page Krajnje Neuračunljive after a meeting of the infamous Sarajevo feminist book club and half a bottle of cherry liqueur. She finds the micro-space feminism the most interesting and the personal becoming the political. She is a militant fighter for women’s reproductive rights. She wants to reach the level of feminism on which she will be able to stop waxing.

Hana Ćurak (22) holds BA in International Relations. She is a member of CRVENA – Association for Culture and Arts, and works on improving public diplomacy in the Balkans through the Association Terra Dinarica and through content creation for the Balkan Vibe platform. She is interested in Human Rights Management, the city, socialist heritage and policy-making, so she loves writing and researching public space, especially women in it. Sve su to vještice is a Facebook page that has no author nor owner, it is a common good of all generations of women. Sve su to vještice accumulates advice, comments, questions, jokes, derogatory names and similar language forms that women across the Balkans face daily, but often decide to neglect or categorize them as harmless. Sve su to vještice seeks to point out a problem of perpetuating specific gender roles through language, especially the roles that are implied as subordinate, and the roles that represent, basically, gender-conditioned free service. The ultimate goal of this page is to tackle you, make you laugh and encourage you.

Berina Džamailović – still resisting pressure to finally decide her profession, but she imagined herself, among others, as a seller of homemade jam plum, breeder of unusually big tomatoes, controversial filmmaker, tumblr star and arranging tables for gala dinners professional consultant. In the real world she is a heated debater on ideology, sociology student, co-founder and co-editor of the online platform KRIVA – Feminist Media Production, and a member of the infamous Sarajevo feminist book club. She still hasn’t completely mastered the skills of writing short, funny biographies.