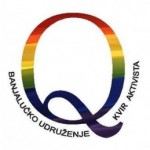 Sarajevo Open Centre harshly condemns the attack on LGBT activists in Banja Luka and demands from the authorities to respond adequately to both that case and former cases.

In the following lines, we give you the statement from the Banja Luka Queer Association Activists (Banjalučko Udruženje Kvir Aktivista):

Last night, on March 29, two masked youths committed the criminal offense of intimidation and security against the members of the Banja Luka Queer Association Activists.

The Banja Luka Queer Association Activists decided to cancel the activities regarding the celebration of March 31. The International Transgender Day of Visibility and the promotion of Queer Re:act, Love, Your Children (Queer Re:Act, S ljubavlju, vaša djeca) and the digital stories of the Assocciation Okvir (Udruženje Okvir) which were supposed to be held on April 1, 2014. The activities were cancelled to protect the safety of all participants.

This act portrays the real situation and the position of LGBTIQ population, not just in Banja Luka but also in Bosnia and Herzegovina. The Banja Luka Queer Association Activists wants to send a clear message that public silence will not protect anyone, and we once again remind the authorities that they should actively advocate the respect of fundamental human rights and freedoms. It is our responsibility to both individually and collectively condemn the open breach and endangerment of basic rights and to promote and defend diversity regardless of gender, sex, class and ethnicity because we believe that everybody has equal rights to express their freedoms without fear of  violence, discrimination and oppression.