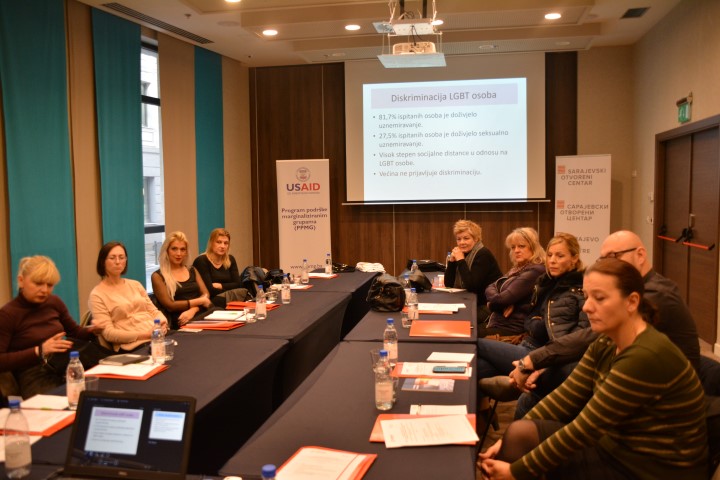 On 30 October 2017 Sarajevo Open Centre held a half-day Info Session with the representatives of the sectoral institutions of the Canton Sarajevo Ministry of Labour, Social Policy, Displaced Persons and Refugees, for the following institutions: Therapeutic community University of Sarajevo Campus, Family Counselling, Disciplinary Center for Juveniles and the Ministry itself. The Info Session was of educational nature, and it aimed at educating and sensitizing the representatives of these institutions on the issues that relate to LGBTI population.

During the second part of the half-day Info Session, the speaker was Naida Kučukalić who presented the Guidelines for treatment of LGBTI persons. The Guidelines relate directly to the Canton Sarajevo Ministry of Labour, Social Policy, Displaced Persons and Refugees, and to the participation of other institutions in the process of change that aims at non-discrimination and respect for human rights. The Guidelines are divided into seven steps that relate to raising awareness on prejudice, respect and protection of human rights, professional approach, non-discrimination, protection of privacy and confidentiality, continued education, as well as sensitization and inclusiveness.

The representatives of the state institutions are representing all the citizens and, because of that, it is of utter importance that they advocate the protection of all of us, promote diversity, equality, combating discrimination, and to publically condemn hate speech. So far, the public was mostly restrained or positioned negatively in respect to LGBTI persons, however, there is change regarding the relationship between LGBTI persons/NGOs that advocate for the respect of human rights of LGBTI persons and the institutions. This positive change is happening, among others, thanks to the education and sensitization, and the institutions’ representatives will to cooperate with LGBTI persons.

The half-day Info Session was held in scope of the project „Building institutional networks of support for lesbian, gay, bisexual, transgender and intersex (LGBTI) persons in Canton Sarajevo“, and financed by USAID’s Marginalized Populations Support Activity in Bosnia and Herzegovina (USAID/PPMG).