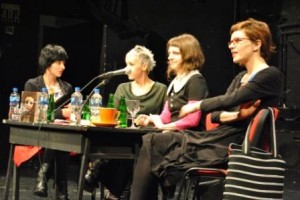 Promotion of the collection of papers entitled “Someone said feminism?” was held on March 7th, in Sarajevski ratni teatar. The speakers on the promotion were  Adriana Zaharijević, editor,  Ivana Dračo and Sandra Zlotrg, authors and the moderator was Jasmina Čausević from Sarajevo Open Centre.

This fourth, Bosnian, release of famous collection of papers was released by joint cooperation of Sarajevo Open Centre, Heinrich Böll Foundation and CURE Foundation. This publication coveres text by 34 authors, which are divided by chapters, concerning the rights and freedoms of women, issues of personal and political, identity and difference, representation of women, art, literature, and theory and activism.

Besides original texts, the book also includes appendixes on the right to vote in the countries of the world, presidents and prime ministers, the significant women in medicine and nobel prize winners. At its end, the book gives a brief historical overview of important dates for feminism in the world, Bosnia and Serbia.