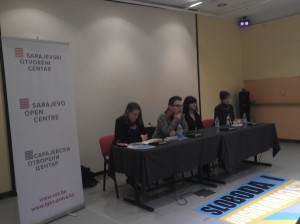 The presentation of publication „Monitoring of the Implementation of the Council of Europe Committee of Ministers Recommendation on Combating Sexual Orientation and Gender Identity Discrimination” has been held today on 28th of March in Mediacentre in Sarajevo.

The panel was moderated by Saša Gavrić, the executive director of Sarajevo Open Centre bio je Saša Gavrić, and the participants were Mary-Ann Hennessey, Head of the Council of Europe’s office in Sarajevo and the authors of the report Marinha Barreiro and Vladana Vasić. Mary-Ann Hennessey addressed the significance of the Recommendation and its implementation, as well as the importance the produced report will have in the following review of the implementation of BiH obligation by the Council of Europe. The authors of the report explained the process of producing the report, the methods of gathering information and presented their findings on the work of BiH authorities regarding the implementation of Recommendation since its adoption in 2010. They also shared positive and negative experiences they had while cooperating with the authorities.

Monitoring report on the implementation of the Council of Europe’s Committee of Ministers on combating discrimination on the grounds of sexual orientation and gender identity is the result of a research project of Sarajevo Open Centre in cooperation with ILGA – Europe. Within this project Sarajevo Open Centre contacted several ministries and public institutions, seventy one in total, in charge of implementation of anti-discriminatory measures in ten different fields. These fields were regulated by the Recommendation and its Appendix. Only twenty seven institutions, out of seventy one, responded to the questionnaire.

The questionnaire on implementation of the measures on combat against discrimination was sent to the institutions in charge of: right to life, security and protection from violence; freedom of association; freedom of expression and peaceful assembly; right to respect for private and family life; employment; education; health; housing; sports and right to seek asylum. Recommendation also addressed the issue of national human rights structures and their work, as well as the combat of discrimination on multiple grounds.

The information gathered in this report indicates that the only measure BiH government undertook in the accordance with the Recommendation was the legal prohibition of discrimination on the grounds of sexual orientation and gender identity. However this prohibition offers very little protection to LGBT persons in the intolerant and homophobic society of BiH authorities will have to revise and harmonize the existing legislative with the Anti-discrimination law and conduct a public campaign to raise the awareness of the public on the mechanisms for protection of discrimination, and adequately implement the Recommendation in order to comply with the obligations they received by the Council of Europe.

The participants of the panel stated that this report is a good basis for further advocacy and monitoring of the implementation of BiH authorities’ obligations and for the future work on necessary changes in policies and legislation that will improve social and legal status of LGBT persons in BiH.